Stocks Up, Consumer Sentiment Down

Rising gas prices are having a negative impact on U.S. consumer sentiment, although projections suggest the feeling is temporary according to the Reuters/University of Michigan consumer sentiment index. The Energy Department noted prices edged up another $0.04 in the past week, keeping more money in the pump and leaving consumers with less to spend elsewhere. Meanwhile, improvements in the stock market have some wondering about inflation, including Federal Reserve chairman Ben Bernanke, despite gains being propped up by a strengthening labor market. For more on this continue reading the following article from Tim Iacono.

The Reuters/University of Michigan consumer sentiment index dipped from 75.3 in February to 74.3 in the first of two readings for March in a sign that rising gas prices may now be having in an impact on the mood of the consumer.

Based in large part on a recently improving labor market, the current conditions component remains firm, up from 83.0 to 84.2, however, the expectations component more than offset that gain, down from 70.3 to 68.0. 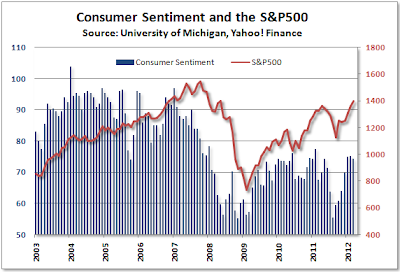 It’s a good think that equity markets don’t have a gas tank to fill every week or they too might think about pulling back but, so far, they show little sign of doing so, though that could soon change given that inflation expectations show signs of stirring to life.

Survey respondents ratcheted up their one-year outlook on consumer prices from an increase of 3.3 percent to 4.0 percent in a delayed reaction to rising pump prices that the Energy Department said gained another 4 cents over the last week, rising to a national average of $3.83 per gallon.

Five-year inflation expectations (the measure watched more closely by Fed economists) rose just one-tenth to 3.0 percent, indicating that, like Fed Chief Ben Bernanke, most Americans see rising gas prices as being temporary, a belief that, unlike Bernanke’s, could prove to be temporary itself.

This blog post was republished with permission from Tim Iacono.
Posted by: Eric Ames @ 7:33 AM