Many people wonder why the much-touted fiscal stimulus did not do more to boost the economy, and some experts answer this question with another: what stimulus? Menzie Chinn, professor of Public Affairs and Economics at the University of Wisconsin, explains in a recent article how the stimulus package was not overly large when examined as a ratio of the GDP. Chinn breaks down the stimulus as it relates to Bush-era tax cuts, spending for the Iraq war and Obama’s health care legislation, demonstrating that in the face of such costs there was really no hope such a fractionally small stimulus package could have stimulated the economy. For more on this continue reading the following article from Economist’s View.

Menzie Chinn makes a point I've been trying to emphasize (with less than full success). When people ask why the fiscal stimulus didn't do more to elevate the economy, the right question to ask is what fiscal stimulus? When the federal efforts are combined with the contractions at the state and local level, there was very little net stimulus. That doesn't mean the federal efforts didn't do something positive and important -- if the federal government hadn't offset the state and local contractions things would have been even worse -- but it does mean that people looking for more than simply treading water as evidence that the fiscal stimulus had an impact are asking the wrong question:

Re-Examining that "Massive Stimulus", by Menzie Chinn: I keep on seeing references to "massive stimulus", so much I have this feeling of innumeracy everywhere. ...

That's not to say that the Federal government did not increase spending; merely that to a large extent it was offsetting the contraction at the state and local levels of government, as I pointed out in this March 2010 post. ...

Even if the state and local governments had not contracted expenditures, the fiscal stimulus arising from the ARRA (spending and tax provisions) would not have been particularly large, when expressed as a ratio of GDP. As I noted on February 6, 2009, as the bill was close to being signed:

I want to stress the adjectives "massive stimulus" conjoined to the noun "bill" is a matter of context. Dividing by baseline GDP shows that in a proportional (rather than dollar) sense the bill is rather modest. The fiscal impulse to GDP ratio never exceeds 2.5 ppts in any given fiscal year.

But then, it was clear that many of the critics never wanted to do the hard work of long division. (Oh, and I still want to talk to all the critics of the bill who said the spending would kick in long after the economy had recovered...).

A parting observation. The impact on the budget (tax reductions and outlays) can be placed in context by comparing to other major undertakings. 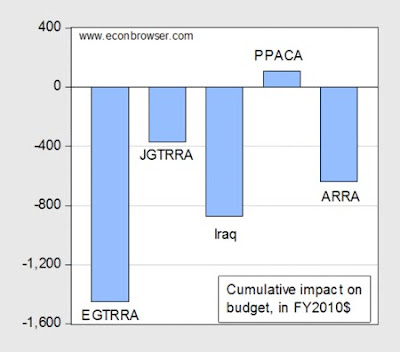 Figure 3: Impact on budget balance, in billions of FY2010$, for EGTRRA; for JGTRRA; cumulative budget authorization for operations in Iraq (Operation Iraqi Freedom, not including incremental debt servicing costs) through FY2012; for Patient Protection and Affordable Care Act; for American Recovery and Reinvestment Act, all in billions of FY2010$, deflated using CPI. Source: CBO, Budget and Economic Outlook: An Update (August. 2001), Table 1-4; CBO, Budget and Economic Outlook: An Update (August 2003), Table 1-8 (revenue implications only); and CBO, "H.R. 4872, Reconciliation Act of 2010: Estimate of direct spending and revenue effects for the amendment in the nature of a substitute released on March 18, 2010," (March 18, 2010), Nominal figures from Amy Belasco, "The Cost of Iraq, Afghanistan, and Other Global War on Terror Operations Since 9/11," RL33110, Congressional Research Service, March 29, 2011, Table 3. Data for FY2011 Iraq operations is for continuing resolution, for 2012 is Administration FY2012 request (see notes to Figure 2 of this post for calculations); for ARRA, CBO Budget and Economic Outlook (January 2012), Box 1-1, page 9; for CPI, historical from FREDII, and forecasts/projections from CBO (January 2012), Table 2-1 (using calendar year forecasted inflation for FY inflation). ...

That is, the first two entries are the Bush Tax cuts, the third the Iraq war, the fourth is Obama's health care legislation (which actually improved the budget outlook according to the CBO), and the last is the federal stimulus package.

The sum of the first three entries -- the Bush tax cuts and the Iraq war -- are approximately four times as "massive" as the stimulus package.