The Commerce Department reported the first drop in consumer sales since June 2012 and analysts are blaming ‘Superstorm’ Sandy on the slip. The storm arrived at typically busy consumer period and auto sales in particular felt the brunt of the blow. Even so, insurance companies note that nearly 250,000 vehicles have been claimed as total losses, which automakers hope will boost sales in the near future. Meanwhile, REtail sales remained flat while gas station sales enjoyed a marginal 1.4% despite falling prices. For more on this continue reading the following article from Iacono Research.


The Commerce Department reported(.pdf) that U.S. retail sales fell last month for the first time since June, down 0.3 percent in October following an upwardly revised gain of 1.3 percent in September, as Superstorm Sandy was cited as having both a positive and negative impact on the data. 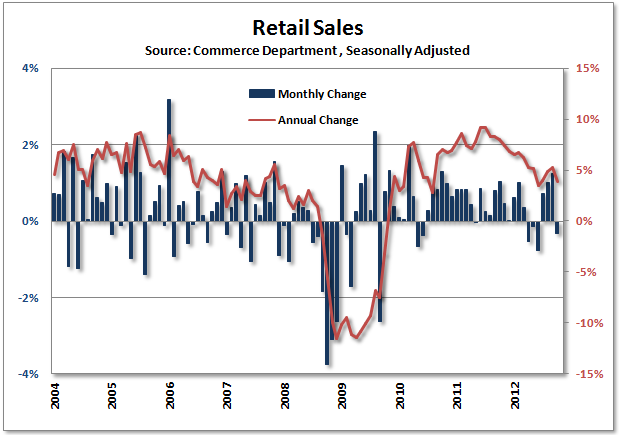 Though the effects of the storm could not be isolated, it is believed that its arrival during the busy month-end period depressed East Coast auto sales leading to a decline of 1.5 percent in October auto sales nationally, this following a jump of 1.7 percent the month prior. Automakers said they expected lost sales to quickly be made up as nearly a quarter million vehicles were totaled during the storm.

Excluding autos, retail sales were flat last month after a gain of 1.2 percent in September as 8 of the 13 categories declined, paced by a surprising drop of 1.9 percent at home improvement stores. In the wake of the iPhone 5 launch the month before, electronic store sales fell 1.0 percent and nonstore retailers saw a drop of 1.8 percent. Gasoline station sales rose 1.4 percent even though pump prices fell throughout the month and food & beverage sales rose 0.8 percent, leading the advancing categories.

This blog post was republished with permission from Tim Iacono.
Posted by: Eric Ames @ 8:19 AM