The Obama administration and emboldened Republicans in 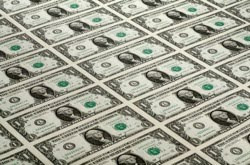 Congress are locked in a game of economic chicken over raising the national debt ceiling or facing default on U.S. government obligations.

Treasury Secretary Timothy Geithner this week found himself in the unenviable position of representing the U.S. government in the role of a delinquent credit card customer asking for a higher credit limit. In place of that line on a credit card account statement that reads "available credit" insert "national debt ceiling."

As the Speaker of the House's gavel was handed over from Nancy Pelosi to John Boehner, it wasn't just the joyful tear in Boehner's eye that captured the essence of the moment, but the empowered deficits hawks among the Republican Party who plan to deny the U.S. government's request to raise the debt ceiling -- or, in the least, use every second of their time in the bully pulpit to position President Obama as a wayward steward of the messy balance sheet otherwise known as the U.S. economy.

Treasury Secretary Geithner penned a letter to Congress this week that was the epistolary equivalent of an executive branch hat-in-hand plea for more money. It wasn't just a plea, though, but also a sharply worded warning. Geithner chose dire descriptions to portray the potential consequences of the political theater playing out with the new 112th Congress, and in reference to the Republicans testing their muscle by saying they won't vote to raise the national debt ceiling.

U.S. Treasury data shows the national debt at $13.95 trillion. The breach of the statutory ceiling of $14.29 trillion set by Congress and signed into law by President Obama in February of last year will occur between March 31 and May 16, according to Treasury Secretary Geithner's letter to Congress.

Sen. Lindsey Graham (R-S.C.) one of the more compromise-minded Republicans on Capitol Hill, took a calm approach to the issue, recently telling CNN, "Let me tell you what's involved if we don't lift the debt ceiling: financial collapse and calamity throughout the world. That's not lost upon me."

If Graham's rhetoric seems hyperbolic, it was matched by Treasury Secretary Geithner's appeal to Congress. The Treasury Secretary noted that never once in the nation's history has Congress failed to raise the debt ceiling when needed. He then rattled off a number of the "catastrophic economic consequences" of the Congressional deficit hawk stubbornness.

A default by the U.S. government would, in effect, cause a long lasting tax on all Americans and the loss of millions of jobs -- and the economic catastrophe would last for decades. Not even to mention that the longtime standing of the U.S. dollar and Treasury bond as the world's financial standard bearers would be given up for good, interest rates would spike, and investors within the U.S. and around the world would likely be spooked.

Additionally, the Treasury Secretary made a distinction between the government shutdown of 1995 and an actual default, saying that one was a short-term disaster for the economy, while the other would be measured in decades.

Even if Congress hems and haws for a while longer, Treasury isn't without any means to fend off a default. Treasury can delay the date by which the debt limit is reached by taking what it already deems extraordinary measures, which it has used before, such as suspending the sale of certain state and local treasury instruments, suspending reinvestment provisions of government funds, and financial engineering tricks involving the Civil Service Retirement and Disability Fund.

Treasury Secretary Geithner made it clear that even if these "exceptional actions" are taken, it would only delay, as opposed to solve, the issue of raising the debt ceiling -- and that sooner or later there won't be any room left under the debt ceiling and the U.S. will default on its obligations.

Amid all the bluster on both sides of the debt-ceiling-versus-default argument, the comments from Lindsey Graham are instructive. Even in seeking out compromise, the Senator from South Carolina has noted that U.S. debt needs to be brought under control so once and for all there can be an end to the endless debate about the U.S. as profligate spender.

The debt ceiling deficit hawks are working concurrently to return the U.S. to the fiscal spending levels of 2008, which Treasury Secretary Geithner says would do no more than delay the inevitable. The Treasury Secretary went out of his way in his congressional appeal this week to stress how cognizant President Obama is of the need for fiscal responsibility and the extent to which the Obama administration is already focused on reining in spending and balancing the federal books.

Some kind of debt cleansing is clearly needed as an act of national catharsis, and it's is going to happen in one form or another. It's simply a question of whether there is the political will -- and any economic sense -- to actually cut the U.S. credit card in half and default, or whether the best road forward is a significant acknowledgment from the U.S. government that it really does need to get its financial house in order, but that going so far as to default on its obligations would be penny wise and U.S. dollar foolish.

There's making a point, there's drawing a line in the sand, and then there's hyperbole from the emboldened Republicans and doomsday scenarios from the Obama administration -- and running through it all, is the question of just how fed up Americans are with the deficit that this country has run up.

Indeed, during the recession, many Americans didn't just lose their jobs, but their homes, and many were forced into the shame of personal bankruptcy -- and for the frustrated among the nickel-and-dimed citizens, it may seem like a cleansing form of fiscal schadenfreude to see the government brought to its knees as well.

This doesn't, however, mean that not raising the debt ceiling and defaulting would be the wise economic move for the nation.

This post by Eric Rosenbaum has been republished from The Street, a site covering financial news, commentary, analysis, ratings, and business and investment content.
Posted by: NuWire Investor @ 5:56 AM