The budget challenges facing states is partly the result of the government overpromising pensions that will be difficult to pay for. Moses Kim says to expect drastic cutbacks by the public sector that will lower public confidence in the government. See the following post from Expected Returns.

The perilous condition of states doesn’t get enough 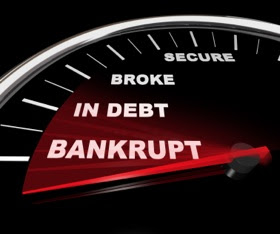 media coverage, although I believe it soon will. People will be forced to consider whether our current system makes economic sense. Pensions are severely underfunded on a nationally level (~$1 trillion) and this will create a huge clash between unions and the government. The average person who has been living under a rock this whole time will finally wake up and ask, “what happened to my retirement?”

As far as I am concerned, the U.S. government is just one giant version of GM. In their heyday, GM made outrageous pension promises to their employees that they could not possibly keep. It just took a couple of decades for those ill-advised pension obligations to help bring down one of the great giants of industry. The U.S. government is no different. Instead of addressing the debt crisis, our leaders are magnifying it. In a global sovereign debt crisis, our leaders decided to take the losses of private institutions onto their own balance sheet. Pure genius. Instead of giving money to Americans and American corporations directly, our government decided to hand out Monopoly money to banks and pray that they lent the money out to struggling Americans. But the post Glass-Steagall structure of banks virtually guaranteed what happened next: the use of government money to churn speculative trading profits. How our leaders failed to see this coming is a mystery to me.

As long as our leaders continue to display a lack of common sense, I can assure you this debt crisis will not be resolved. The crisis at the municipal level has been ignored for far too long. There is no doubt in my mind that what will result from fiscal mismanagement is a form of what is happening in Europe: protests, riots, and bailouts- followed by debt defaults.

I continue to keep an eye on 30-year mortgage rates, which are now above 5% after hovering near 4% the entire year. It’s becoming increasingly clear that states are not going to grow their way out of this crisis.There will be drastic cuts in the public sector that will reshape the way Americans think. People who just lost their jobs and their pensions are not going to be too enthused about buying government paper. They will seek alternative avenues to protect themselves from an irresponsible government. Capital is going to move abroad, and it is going to move into tangible assets.

Please take the time to watch the following 60 Minutes video that gives a brief overview of the looming crisis at the municipal level. Meredith Whitney was dead on in calling the collapse in financials, and I believe she is dead on in predicting a debt crisis in states as well.