How Tax Cuts Make US Treasuries A Risky Investment

A lack of restraint by government in cutting taxes should lower confidence in US Treasuries, writes University of Maryland professor Peter Morici. Washington gave everyone what they wanted, resulting in a troubling outlook for Social Security and the growing federal deficit. See the following post from The Street.

In the wake of the tax-cut deal, rating agencies should 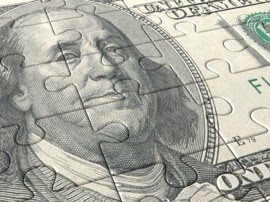 Economists, pundits and politicians had little choice but to endorse the tax deal between President Obama and congressional Republicans, because snapping back to pre-Bush tax rates would crush the economic recovery. But Washington exhibited not even the shadow of self-restraint and cut taxes far beyond what is needed or smart.

Newly emboldened Republicans demanded all the Bush tax cuts be extended. President Obama argued the country couldn't afford those for families in the highest tax brackets, but failed to apply such reasoning to temporary benefits bestowed on Democratic constituencies by his 2009 stimulus program.

Instead of compromising, with each side getting half of what it wanted, Washington feasted -- everyone got everything they wanted and more. Business got its R&D tax credit and a temporary tax holiday on new investments. The wealthy got Bush-era tax rates and even lower rates through temporary elimination of income-triggered phaseouts on deductions and personal exemptions. The poor and middle class got a temporary 33% cut in social security taxes.

Government spending and the federal deficit have gone from 19.6% of GDP and $161 billion, respectively, in 2007, when Nancy Pelosi became Speaker of the House, to 25.1% of GDP and $1.5 trillion in 2011. Unfunded increases in health care spending, the regulatory bureaucracy and fanciful experiments in industrial policy -- windmills, electric cars and batteries, and the like -- have bloated federal spending without credible plans to pay for it all.

Now Congress and the President compound those sins by both enacting additional "temporary" tax cuts that will be very difficult to ever let lapse. For example, thanks to Clinton and Bush tax cuts, the Social Security tax is the principal tax low- and middle-income workers pay -- many pay zero or minimal personal income taxes.

In 2012, when the Congress must revisit the personal and corporate tax codes, permanent reductions in Social Security taxes will be politically necessary to win extensions for the Bush tax cuts benefiting even middle income families and the truly essential benefits businesses need to create jobs, not to mention all the additional goodies the Congress has just bestowed.

This renders the Social Security system absolutely insolvent, and makes permanent budget deficits upwards of $1.5 trillion and about 10% of GDP permanent.

Moody's would be hard pressed to give any government with budget projections like those an investment grade rating, but the U.S. is different.

The dollar is the global currency, and Washington can print dollars if no one wants to buy new Treasury securities to pay off maturing bonds and finance new spending.

Internationally, interest-bearing Treasuries function much the same as currency on the balance sheets of central banks, multinationals and the wealthy. Whether as Treasuries or currency, too many dollars in circulation will instigate inflation as the global economy recovers.

Just the fear of inflation causes investors to demand higher interest rates on virtually all dollar-denominated bonds issued by government agencies, banks and corporations. In anticipation of the new tax cuts, interest rates jumped, despite massive new bond purchases by the Federal Reserve.

As Washington spends and borrows, the Treasury will have to offer higher rates on new 20- and 30-year bonds, making comparable securities issued in 2010 and earlier worth less in the resale market.

For rating agencies, Washington's monopoly on printing dollars makes difficult assigning a conventional rating between triple-A and D on its bonds. Those can't default, but investors' capital is still at grave risk.

Perhaps a special grade -- "F," for "flee now before you get stuck" -- is appropriate for the junk sold by the U.S. Treasury.

This article by Peter Morici has been republished from The Street, a site covering financial news, commentary, analysis, ratings, and business and investment content.
Posted by: NuWire Investor @ 5:56 AM