Although prices of many consumer goods like energy and food are up significantly for the year, the government's numbers for inflation are still near zero. One reason is that falling home prices account for a significant portion of the government's CPI calculation. See the following post from The Capital Spectator.

The Labor Department reported that consumer prices rose 0.1 percent in November following an increase of 0.2 percent in October and, on a year-over-year basis, inflation is now running at a modest 1.1 percent. 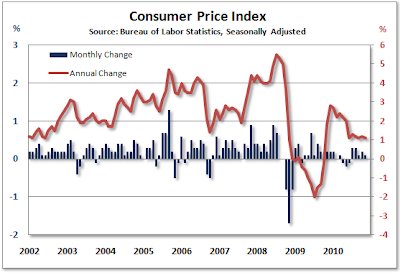 It’s pretty amazing when you think about it and, truth be told, the best of all possible scenarios for the Federal Reserve who, yesterday, affirmed its plans to print upwards of another $1 trillion to buy U.S. debt through the middle of next year. You see, commodity prices are up more than 20 percent on average this year – energy costs are more than 10 percent higher, corn and wheat are both up 42 percent, and soybeans are up 24 percent – yet, the consumer price index is only one percent higher. 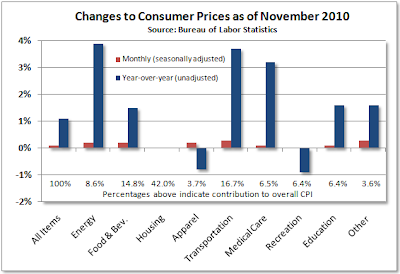 A housing bubble that will likely continue to deflate for at least another year or two will play a big role in keeping the consumer price index anchored around the one or two percent level despite how much it costs you to buy gasoline and pay for tuition and medical care.