Despite Low Consumer Confidence, Retail Sales Are Positive In September

Economic reports in September showed retail sales up slightly with 12 out of 13 major categories posting positive growth. This is despite low consumer sentiment that is 10 percent lower than the average during past recessions. See the following article from The Mess That Greenspan Made.

Two more important economic reports were released earlier today during what was a veritable avalanche of financial news. The Commerce Department reported(.pdf) that retail sales rose more than expected in September, up 0.6 percent following an upwardly revised gain of 0.7 percent in August, as the American consumer is clearly not dead yet. 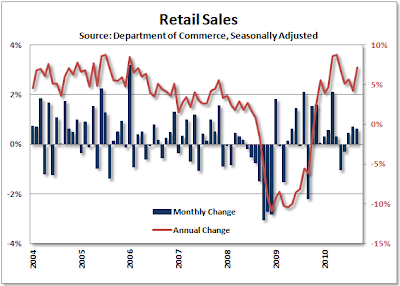 Auto sales bouncing back from a decline of 1.0 percent in August to register a gain of 1.6 percent in September were responsible for about a third of the overall improvement, but gains were broad-based, only one of the 13 major categories – clothing – posting a decline.

Not far behind auto sales were electronics & appliance retailers with an increase of 1.5 percent in sales last month and miscellaneous store retailers and nonstore retailers saw gains of 1.4 percent and 1.0 percent, respectively.

Somewhat surprisingly given the weak housing market, the building materials & garden equipment category along with furniture & home furnishings – two housing related categories – saw solid gains of 0.6 percent and 0.5 percent, respectively. Sales for both of these groups have now risen for three consecutive months.

Clothing & clothing accessories was the only group with declining sales at -0.2 percent.

This appears to be yet another case of “don’t watch what I say, watch what I do” for the American consumer because, based on the latest data from Reuters and the University of Michigan, their mood remains stuck at recession levels. 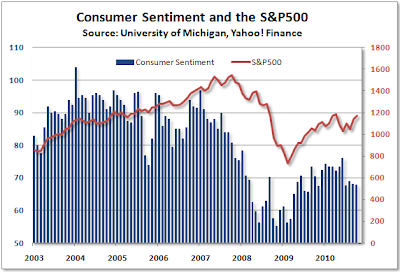 In the first of two readings for October, the consumer sentiment index fell from a final September value of 68.2 to 67.9, still almost ten percent below the average reading of 74.1 during past recessions. As shown above, the average sentiment index during economic expansions of 90.4 hasn’t been seen since February of 2007, almost a year before the recession began, so clearly there is a disconnect in how Americans feel and how they spend.

In the latest data, the current conditions index fell sharply, more than offsetting the improvement in the expectations index, this likely being due to some combination of the persistently weak labor market and, to a lesser extent, recently rising gasoline prices with an increasingly contentious election season perhaps factoring in as well.