The Fed May Introduce A $1 Trillion Treasury Purchase Program

Jeff Kleintop writes in The Street that The Federal Reserve has indicated that inflation is too low which suggests that it will likely take action to reflate the economy. In order to prevent deflation the Fed would likely pursue a strategy to increase the money supply and may introduce a $1 trillion Treasury purchase program at its next meeting, on Nov. 3. See the following article from The Street.

Last week, the official recession-dating committee, the National Bureau of Economic Research, announced that the recession was officially over in June of 2009. This was not surprising to most market participants.

In fact, the LPL Financial Current Conditions Index reflected at that time a move from contraction to growth. However, the question today that most investors want to see addressed is: Will the economy slip back into recession? On that note, the Federal Reserve's message last week implied the Fed was preparing to take action to help ensure the economy avoids a return to recession.

In a surprisingly transparent statement made last week, the Fed told us that inflation is so low it is not doing enough to promote growth. Specifically, the Fed's stated: "Measures of underlying inflation are currently at levels somewhat below those the Committee judges most consistent, over the longer run, with its mandate to promote maximum employment and price stability."

The Fed balances employment and prices by seeking growth that generates the highest level of employment without causing too much price inflation. The Fed has spent much of the past 30 years determining when to attempt to slow down an economy that is growing too rapidly in order to avoid the destructive effects of high inflation. However, when inflation gets too low, as the Fed has noted, it is a sign that growth needs a boost.

The Fed typically acts as a counterweight to Congress' inflationary spending impulses. But the Fed has communicated its view that inflation is too low. With Congress unlikely to pass another substantial spending package, the Fed is likely to take action.

If inflation is a bad thing, then how can inflation be too low?

Inflation results when too much money is chasing too few goods and services. This results in higher prices and usually happens when demand is strong but output is constrained in the form of shortages of materials or capacity. Deflation, or falling prices, is the opposite of inflation and generally occurs when the supply of goods rises faster than the supply of money.

The problem with deflation is that when prices fall as output exceeds demand it can become self-perpetuating as consumers and businesses postpone spending because they believe prices will fall further. Consumers and businesses delay buying expensive items like homes or cars because they believe these things will be cheaper in the future. As a result, spending and economic growth slows. But it does not stop there.

Businesses profits weaken straining their ability to pay their debts and leading them to cut production and workers. This, in turn, results in lower demand for goods which leads to even lower prices and so on as a destructive downward spiral takes root.

From Deflation to Reflation

To combat fears of a downward spiral of deflation the Fed is preparing a reflation strategy. Typically, the Fed lowers the cost of money, or interest rates, when it wants to promote growth. But with the Fed having already lowered rates effectively to zero, it intends to increase the supply of money by buying bonds in the market.

The Fed will likely be engaging in quantitative easing. That means it will expand the supply of money in the financial system in an effort to encourage lending and economic growth. This can counter deflationary fears by directly inflating the money supply. All else equal, this means that with more dollars in the system, the value of the dollar goes down and prices in dollar terms go up, resulting in a faster pace of inflation.

The Fed took a small step in the direction of providing more stimulus at its Aug. 10 meeting when it committed to increasing the quantity of money in the financial system by purchasing Treasuries as the housing debt the Fed holds matures.

Last week, at its Sept. 21 meeting, the Fed paved the way for another much larger quantitative easing at an upcoming meeting later this year. The Fed may introduce a $1 trillion Treasury purchase program at its next meeting, on Nov. 3.

Incorporating the theme of reflation into your portfolio may be beneficial. Key positive effects of reflation are likely to be seen in precious metals, commodities, commodity-sensitive stocks, emerging markets, real estate and Treasuries. The dollar and the financial sector may be negatively impacted.

Precious metals: Gold may be the most obvious beneficiary of the Fed's intentions. Inflation and a falling dollar tend to lift gold investment demand as a way to preserve value. Gold prices made new all-time highs last week. This trend can continue as the dollar falls and inflation picks up.

Commodities: Commodity prices, including those of cotton, copper, and corn, just to name a few, may also benefit from the outlook for reflation and dollar depreciation. The potency of the reflation theme as it related to commodities can be seen in crude oil. Crude prices were up on the week despite the report of near record-breaking U.S. inventories.

Commodity-sensitive stocks: The Fed's intention to avoid a return to recession and the potential for another liquidity-fueled rally like that of 2009 argue in favor of stock market performance.

On the other hand, the effectiveness of the Fed's actions remains to be seen with liquidity already abundant in the financial system the inflationary consequences seem more assured than better growth prospects. Stocks gained 1% for the week following the Fed's announcement.

However, stocks generally slumped shortly after the Fed's announcement on Tuesday. The gains came on Friday as stronger-than-expected data on business spending were released. Not surprisingly, the commodity-driven Materials and Energy sectors outperformed the S&P 500.

Emerging Markets: If the dollar weakens, gains in investments denominated in foreign currencies translate into more dollars, boosting possible returns. Emerging Market stocks and bonds benefit from appreciating currencies relative to the dollar and the increasing value of their commodity-based output.

Treasuries: Purchasing Treasuries will be the primary way the Fed implements Operation Reflation. The price of the 10-year Treasury note rallied, pushing down the yield 10 basis points since the announcement by the Fed last week.

However, while there may be additional short-term gains for Treasuries, longer-term inflation risks are increasing as well. This risk is evident in the nearly record-breaking spread between 10- and 30-year Treasury bond yields at about 1.2 percentage points.

The better economic data reported in September have pushed prices down and the yield up on the 10-year Treasury by 14 basis points this month while the more inflation-sensitive, longer-term 30-year Treasury yields have increased 28 basis points. Direct beneficiaries of reflation are TIPS, or Treasury Inflation-Protected Securities. The principal of TIPS increases with inflation. 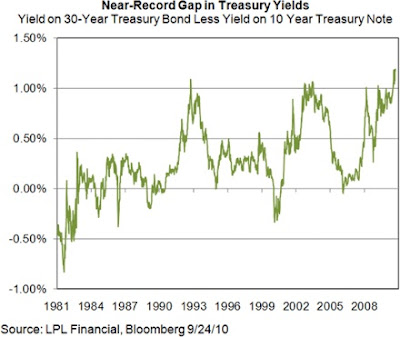 Dollar: The Fed's intentions are weighing on the greenback. As the Fed increases the quantity of dollars in the financial system the value of the dollar is likely to fall. The Fed's statement drove the dollar to its lowest level in nearly eight months. The dollar even strengthened against the euro despite news of deteriorating European economic growth and spiking Irish and Portuguese bond yields on rising default concerns.

Even more impressively, the move in the dollar eroded nearly all of the start of a downtrend in the yen versus the dollar that the Bank of Japan took great efforts to create in the week before the Fed meeting. A falling dollar and rising inflation puts pressure on cash as a long-term holding.

On the other hand, investment banks may benefit from the additional credit to fuel profitable merger and acquisition deals and more bond underwriting as businesses look to refinance at lower rates. Nevertheless, since the Fed announcement, financials have been the worst performing sector.

While the near-term impacts of Operation Reflation are reasonably clear, the longer-term effects are not. Unlike during the financial crisis when liquidity was scarce, the benefits of adding more cash into the financial system on growth and employment may be very limited in the current environment given the already high cash balances at banks and corporations.

In addition, U.S. stimulus cash may wind up fueling emerging market-growth as U.S. companies deploy the cheap cash to fuel growth in markets with lower labor costs and stronger demand. The Fed also risks undermining the lower interest rates that are essential to growth by devaluing the dollar, making U.S. Treasury bonds less attractive to the foreign investors that we are increasingly dependent upon to fund our national debt.

We are cautious on the longer-term economic growth impact of another round of stimulus. However, we do not believe a return to recession is the most likely outcome and believe that the economy will muddle through with below-average growth in the coming quarters.

In the near-term, Operation Reflation provides us with an investment theme. And lastly, though we expect near-term weakness in the stock market, the timing of the mid-term elections on Nov. 2 and the Fed's next meeting on Nov. 3 could help to fuel a year-end rally for stocks.

This article by Jeff Kleintop has been republished from The Street, an investment news and analysis site.
Posted by: NuWire Investor @ 5:52 AM