Preparing Your Portfolio For A Declining Dollar

Professor Simon Johnson from MIT expects the dollar to trend lower due to several reasons including the likelihood of emerging nations diversifying their reserves away from the dollar. With signs pointing to a declining dollar, James Picerno advises that US investors would be prudent to hold some non-dollar allocations in their portfolios. See the following post from The Capital Spectator.

"Like it or not, significant dollar depreciation is more probable than most now suppose," writes Simon Johnson, a profes 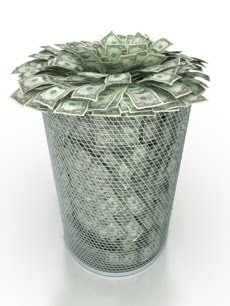 sor at MIT’s Sloan School of Management, in a Bloomberg column today. The market seems to be discounting no less. Certainly the gold market is roaring higher in part because the odds that the dollar will fall in the months (years?) ahead look quite a bit better than even.

Johnson, co-author of 13 Bankers: The Wall Street Takeover and the Next Financial Meltdown, sees three reasons why the dollar will trend lower: 1) worries over political gridlock in Washington as the country grapples with a huge budget deficit; 2) sluggish U.S. economic growth, which will compel the Fed to focus on lowering long-term interest rates, a.k.a., a new round of quantitative easing; and 3) the growing appetite of emerging market nations to diversify their large and growing foreign exchange reserves into currencies other than the greenback. "The dollar is, therefore, likely to depreciate against all floating currencies," Johnson predicts.

That's hardly a radical idea these days, considering that the buck has been more or less weakening since June, as the chart below shows. The previous rebound in the dollar that prevailed in the first half of this year now appears to be over. One reason is because of an increased appetite for risk in the global economy in recent months. When macro anxiety rises, liquidity tends to gravitate into dollars, the world's reserve currency. But as investors and governments have become convinced recently that the economic challenges aren't quite so acute, particularly outside of the developed economies, the appeal of non-dollar assets and currencies has taken flight once more.

Safe? Well, that's going too far. But certainly it's prudent for U.S. investors to hold some amount of non-dollar allocations in their portfolios. There are several options, including broad commodity funds. Commodities, which are generally priced in dollars, tend to move in the opposite direction of the buck. Two of the more popular exchange traded products in this corner: iShares S&P GSCI Commodity-Indexed Trust (GSG) and iPath DJ-UBS Commodity Index TR ETN (DJP). The underlying index designs are energy heavy, however. For a lesser emphasis on oil and gas, take a look at ELEMENTS Rogers Intl Commodity ETN (RJI) and GreenHaven Continuous Commodity Index (GCC).

Gold in particular is the leading commodity alternative to the dollar. The world generally sees the precious metal as the antidote to Washington's fiat currency, which is why the pair generally share a negative correlation. Two leading gold ETFs: SPDR Gold Shares (GLD) and iShares COMEX Gold Trust (IAU).

Foreign stocks and bonds priced in local currencies are another option, although each must be analyzed in concert with the underlying fundamentals of their respective markets along with the forex outlook. Although most non-U.S. stock ETFs and mutual funds don't hedge forex, foreign currency exposure is a bit tougher to find in foreign bond products. Harder, but not impossible. A small but growing list includes SPDR Barclays Capital International Treasury Bond (BWX) and iShares S&P/Citigroup Int'l Treasury Bond (IGOV) Meanwhile, consider too the first local currency emerging market bond ETF: Van Eck Market Vectors Emerging Markets (EMLC). Keep in mind that the forex factor tends to be much larger for bonds vs. stocks. Why? Bonds generally have a relatively low expected return vs. equities, which means that the forex factor can easily overwhelm the risk/return profile for foreign bond portfolios.

If you can stomach the volatility and have a taste for speculation, there's also a wide choice of foreign currency ETFs to capitalize on a weakening dollar, ranging from the PowerShares DB US Dollar Index Bearish (UDN), which is primarily a euro and yen play, to the emerging-market focused choices (WisdomTree Dreyfus Emerging Currency Fund (CEW) as well as individual country targets (WisdomTree Dreyfus Brazilian Real Fund (BZF) and WisdomTree Dreyfus Chinese Yuan Fund (CYB).

Investing in currencies comes with a high risk, of course, and so it's not for the faint of heart. Caveat emptor.

But even if you're a conservative investor with a long-term outlook, and your portfolio is missing equity and/or bond allocations denominated in foreign currencies, it's time to rethink what amounts to a huge bet in favor of everything going well in the U.S. I wouldn't discount the possibility, but neither would I bet the farm on that scenario either.