After months of fast-paced growth in Chinese real estate markets, government restrictions may be starting to reverse the movement in prices. Shanghai is one of the first markets to show signs of slowing with a double-digit fall in luxury home prices. See the following post from The Mess That Greenspan Made. 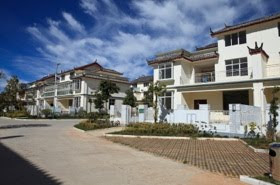 The lastest un-China-like report on prices comes from this story in Bloomberg.

Another Bloomberg report details the effect on local governments where the land sale boom of recent years appears to have no obvious replacement as a source of government funding. Israel’s Financial Expert provided details of what he thinks is behind the boom, replete with videos of angry citizens and a run on one of the banks.

Steven Roach’s recent protestation that China does not have a housing bubble is looking a little shakier with each passing day and each new revelation about what’s been going on.