Buying assets on sale and waiting is an effective investment strategy and Moses Kim argues that gold is currently on sale. Mainstream analysts may say that gold is in a bubble, however the mainstream is often wrong, which creates opportunities for those who go against the grain. See the following post from Expected Returns.

Anyone who has been following this blog kn 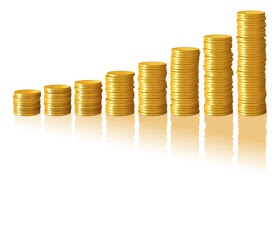 ows that I tend to do the opposite of the mainstream. My latest rendition of contrarian investing occurred at the latest intermediate term bottom in stocks when everyone was bearish, with many calling for a crash. What was I doing? I was buying.

I have been doing one thing consistently for the duration of this bull market: accumulating gold shares while everyone is sleeping. What puts investors to sleep? Multi-month consolidations, brutal corrections, and non-stop talk of an impending gold bubble. The ironic thing about gold bubble talks is that no one is buying at current prices. No one. At bubble tops, everyone is falling over themselves to buy. Again, this is the strangest "bubble" I've ever seen in my life; maybe gold bubble experts can enlighten me.

Every time gold corrects, gold permabears conjure up explanations to support their conclusions. The current correction in gold is apparently a product of the developing double dip in the economy that will bring about deflation. Gold does poorly in a deflationary environment because, well, gold bubble experts said so.

Now let me get this straight. These "experts" didn't see the double dip coming, now all of a sudden they are telling you how it is going to play out? What a joke. Follow their advice at your own peril.

If you recall, the consensus believed we were in the middle of an economic recovery- the only question was one of magnitude. Only a very small minority was calling for the double dip. Now, suddenly, the Paul Krugmans of the world are calling for a Depression. They are calling for another round of stimulus. They are trying to pontificate and educate when they couldn't foresee the tsunami that was approaching. This is inadvertent humor at its finest.

Now how do you use the mass delusion of the mainstream to your advantage? Simple. Buy misunderstood assets on sale.

Buying assets on sale is such a simple concept that you would assume everyone follows this fundamental tenet of investing. But Warren Buffett has said that it is a concept that you either grasp immediately or never at all. I wouldn't have believed him had my experience not shown me that people act incredibly irrational at times. Only humans are subject to self-destructive mental blocks that prevent them from seeing the obvious.

Right now, it's obvious we are going to experience a dual debt and currency crisis. It is obvious that gold is in a bull market and that it will benefit from the impending crises. But amazingly people aren't buying gold because in the Land of Ignorance, gold is a bubble.

I have a simple question to ask gold bubble experts. How many bubbles in history retested their highs 2 and a half years after the bubble burst? Let me give you a couple of hints: The Nasdaq is still trading over 50% below its all-time highs 10 years after the bubble burst; and the gold bubble of 1980 didn't retest its highs for 27 years. On the other hand, the HUI is retesting its highs from early 2008.

Oh wait, did I just used historical facts to support my position? I apologize. Let me defer to the expertise of gold bubble experts who have mastered the art of subjective, gut, "feel" analysis. 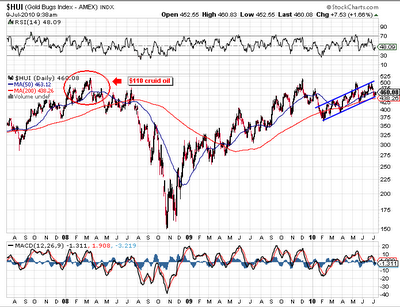 Now, oil is trading at $75 dollars and gold is trading at $1200 dollars. 16 to 1 ratio. The profit margins for gold miners are starting to widen. Does it really take an investing genius to tell you gold shares are cheap? 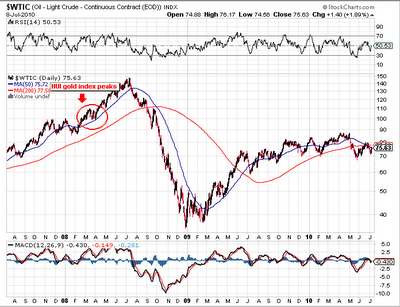 The market is giving you a gift. If you are not adding gold shares at these levels, you will be feeling two things in a year: pain and regret. It is never easy to make money in markets, period. You must be able to analyze data and think through probabilities without letting mainstream opinions cloud your thinking. The probabilities point to a major rise in gold. People are losing hope that we are going to rally sharply from here, which ironically, make it more likely to occur. Buy the dips and sit on your hands- you will eventually be rewarded in a big way.