Economists Call For Central Bank To Do More To Stimulate Economy

James Picerno discusses why the risk of deflation should not be ignored and describes some of the monetary policies that may reduce the risk. With the market's expectation of inflation over the next ten years falling to 1.79%, some economists are calling for another round of monetary stimulus. See the following post from The Capital Spectator.

The market's falling inflation forecast over the last t 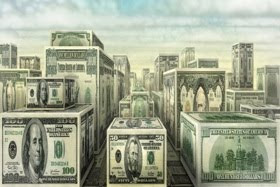 wo months took a breather yesterday, but the subject of monetary policy and the heightened risk of deflation is hotter than ever, as we've been discussing (here and here, for example). It wasn't obvious that the central bank was prepared to act, but now it appears that the Fed is starting to recognize the problem, or so recent news reports suggest.

The current outlook for inflation, based on the yield spread between the nominal and inflation-indexed 10-year Treasuries, rose slightly to 1.79% yesterday--the highest since June 30. But since late April, the market's expectation for inflation over the next 10 years is still down sharply from around 2.45% in late-April. Debate rages about whether the trend is a warning sign for the economy or merely statistical noise.

The central bank, however, seems to be taking the threat a bit more seriously these days. As the Washington Post reported yesterday, the "Federal Reserve weighs steps to offset slowdown in economic recovery." According to the article:

Top Fed officials still say that the economic recovery is likely to continue into next year and that the policy moves being discussed are not imminent. But weak economic reports, the debt crisis in Europe and faltering financial markets have led them to conclude that the risks of the recovery losing steam have increased. After months of focusing on how to exit from extreme efforts to support the economy, they are looking at tools that might strengthen growth.

"If the economic situation changes, policy should react," James Bullard, president of the Federal Reserve Bank of St. Louis, said in an interview Wednesday. "You shouldn't sit on your hands. . . . I think there's plenty more we could do if we had to."

With the Fed funds target rate at zero-0.25%, conventional monetary policy seems to be at a dead end, a.k.a. the problem of the zero bound, as it's known. But as the WaPo story advises, unconventional tactics include talking up the outlook for low interest rates for an extended period, cutting the rate to zero for bank reserves held at the Fed, and buying more mortgage securities to add to the Fed's balance sheet.

Economist Mark Thoma thinks the Fed should try another round of unconventional monetary policy stimulants, but warns against expecting too much. As he explains,

I think the economy needs more help, particularly labor markets. But where will that help come from? Additional fiscal policy seems to be off the table due to worries about the deficit, worries I think are baseless, but I don’t control the fiscal policy levers. That’s the best thing to do right now, but it’s not going to happen.

The Fed should use these tools, "but we shouldn’t expect miracles," warns Thoma.

Paul Krugman is also skeptical, although he advises: "What would really be effective would be a credible commitment to a higher inflation target, which would reduce real interest rates. But that’s not on the menu, at least not yet." In any case, he's dubious about what it all means. "It’s good to see the Fed getting worried; but don’t get too excited," he writes on his blog.

But economist Scott Sumner thinks unconventional monetary policy still has quite a bit of punch left, if the Fed is willing to use it. "The real 'big guns' would be a higher price level target," he opines. "I want the Fed to raise interest rates by setting a much higher price level or [nominal GDP] target," he asserts. "But alas, the Fed seems horribly confused about this issue. Only if the period of zero rates was linked to economic conditions in such a way as to increase inflation expectations, would the policy have any stimulative effect."

Of course, it's easy to dismiss higher inflation targeting if outright deflation is only a threat, as it is at the moment. Indeed, Baum suggests that a little deflation can be a good thing. And Daniel Gross at Slate.com writes that "a pleasant surprise when prices of many items fall." He notes that there's good and bad deflation. The bad kind is a byproduct of falling output and the dark side of the business cycle a la the Great Depression vs. the good kind that's driven by rising productivity and technological innovation.

Unfortunately, much if not all of the deflationary winds blowing these days come from the dark side. To be fair, outright deflation isn't here yet, nor is it certain (or even likely) that it'll turn up. But the risk is rising. And with the outlook for a jobless recovery looming, this is no time to soft pedal the D risk. Yes, the Fed overestimated the potential for deflation in 2002-2005, keeping interest rates too low for too long. But that was then; this is now.

Sure, a little deflation is a good thing. Everyone likes to pay less (except when it comes to investing, but that's another issue). The problem is that keeping the monster in the box is quite a bit tougher once he's escaped. Figuring out when he's escaped vs. merely peeking out and blowing raspberries is as much art as it is science, which makes the near-term future that much more hazardous for policy choices.

Is a lot of deflation a bad thing? Absolutely. Ignoring the danger is simply ignoring economic history. But the issue isn't whether pundits understand the challenge. It's all about central bankers, and at the moment the jury's still out.