According to the Washington Post, the Federal Reserve is considering options to stimulate the economy in response to the cut backs in fiscal stimulus measures. One option involves continuing to communicate plans to keep rates "exceptionally low" for an "extended period". See the following post from The Mess That Greenspan Made. 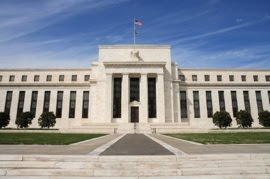 this report at the Washington Post, Neil Irwin lays out the three modest options currently being considered by the Federal Reserve to spur growth now that the U.S. economic recovery appears to be experiencing a modest setback and Congress seems unwilling to act.

One pro-growth strategy would be to strengthen language in Fed policy statements that the central bank’s interest rate target is likely to remain “exceptionally low” for an “extended period.” The policymakers could change that wording to effectively commit to keeping rates near zero for even longer than investors now expect, perhaps adding specifics about which economic conditions would lead them to raise rates. Such a move would be opposed by many members of the Fed policymaking committee who are wary of the “extended period” language, arguing that it limits their flexibility.

Another possibility would be to cut the interest rate paid to banks for extra money they keep on reserve at the Fed from 0.25 percent to zero. That would give banks slightly more incentive to lend money to customers rather than park it at the Fed, although it also could cause technical problems in the functioning of certain credit markets.

A third modest possibility would be to buy enough new mortgage securities to replace those on the Fed balance sheet that are paid off as people take advantage of low interest rates to refinance.

It doesn’t sound like much yet, but, it’s a big departure from the discussion earlier in the year when the big question was whether the “extended period” language was going to be removed from the policy statement in the upcoming Fed meeting or in the one after that, paving the way for short-term interest rate hikes three to six months later.