As the US consumer price index dropped last month amid earlier rallies in both the US dollar and gold, the possibility of deflation has returned. While long-term inflation remains a concern, James Picerno cautions that central banks and governments would be wise to focus first on curbing any deflationary risks that could more severely impair recovery from the global recession. See the following post from The Capital Spectator.

Last week, I advised that the unusual rallies in the dollar a 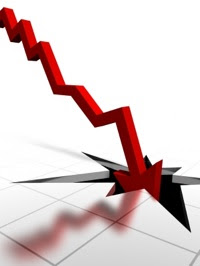 nd gold this year may be a warning sign that deflationary winds are starting to blow harder. Historically, one falls as the other rises. The fact that both are climbing suggests the markets are worried about deflation...again. Today's report on April consumer prices only strengthens the case for thinking that the "D" risk is climbing once more. It may be a false warning, but it's getting harder to ignore.

The seasonally adjusted consumer price index (CPI) dropped 0.1% last month, the Bureau of Labor Statistics reported today. That's the first monthly fall in headline consumer prices in more than a year. The sharp drop in energy prices last month was a driving factor, but core CPI (which strips out food and energy prices) was flat in April, suggesting that there's more than a weak energy market to blame.

It's still too early to declare that deflation is again a broad and imminent threat, as it was in late-2008. But the "D" risk is higher, if only marginally. The primary catalyst: debt. The debt crisis in Greece has soured sentiment on the outlook for the eurozone and throughout the developed world. The world's attention has been refocused anew on the perils of debt and deficits in the new world financial order. As the mature economies struggle with rising levels of red ink, combined with less-than-robust forecasts for growth, the markets are turning cautious. That's inspired a new (and so far mini) flight to safety, which still means moving into dollars and, to a lesser extent, gold.

In a world where anxiety is once again on the march, if only slightly, it's no wonder that prices generally are weakening again. One month is hardly definitive proof of anything, of course, and so we can't draw hard and fast conclusions from a single monthly report on consumer prices. Rather, it's the trend that's important. Unfortunately, the trend offers little reason to think that disinflation (or its evil cousin deflation) is completely dead.

Headline inflation, which includes energy and food, offers a more reassuring trend, as the second chart below shows. Nonetheless, it's obvious that the reflation efforts have stalled of late. Headline CPI on a 12-month basis has rebounded sharply from last year's brief flirtation with outright deflation. The question before the house: Has it stabilized in the mid-2% range? Or is it poised to fall once again, dragged down by the deflationary winds that appear to be blowing?

The Treasury market seems inclined to expect more deflationary risk in the near future. The inflation forecast based on the yield spread for the nominal and inflation-indexed 10-year Notes was 2.13% yesterday—down from 2.45% on April 29, as the third chart below shows. Yes, that may be nothing more than the usual volatility in the Treasury market. But given the clues bubbling elsewhere in the global economy, we're not yet prepared to dismiss this forecast of falling inflation as statistical noise.

The next several weeks may prove crucial in confirming or rejecting the new deflationary worries. Indeed, it's still too early to dismiss the continuing liquidity creation by the world's central banks. In the long run, higher inflation is a virtual certainty. In fact, the risk of opening the door to overly high inflation for the generation ahead remains a concern. But not now. The path from here to there may yet be defined by fighting a new round of deflationary pressures.

Considering the hazards that outright deflation can impose on the prospects for economic recovery, it's obvious that keeping the "D" risk at bay is a battle that the central banks can't afford to lose. Growth is the only real hope of making progress in repairing the damage from the Great Recession. Everything from job creation to keeping the red ink from overwhelming national budgets is at stake. Even before the recent uptick in the deflationary threat, the outlook for economic growth was middling, at best, in the developed world. That somewhat uninspiring outlook now appears a bit more vulnerable. Exactly how vulnerable depends on what we learn in the economic reports in the weeks ahead.

For the moment, inflation is tame to nonexistent. Deciding if that's also a prelude to deflation is a live debate…again.

Even so, don't assume that the global economy can be summed up with one perspective. The hazards that lurk in the mature economies aren't always reflected in the developing world. "Chinese inflation might be out of control," warns Fortune.com today.

It's a complicated world. The common denominator: risk. There's still plenty to go around. Same old, same old. It just comes in a wider array of flavors these days.