Is There A Double Standard For Wall Street And Main Street?

Banks have responded to the taxpayers bailout by foreclosing on homeowners, raising credit card rates and tightening credit. This circumstance has unintentionally created an environment where it may make more sense for beleaguered homeowners to walk away from their underwater properties than spend years or even decades trying to recover. See the following article from The Street for more on this. 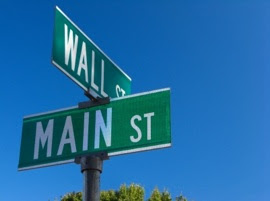 make risky bets that blow up. The government decides that many of these financial firms are "too big to fail" or present a "systemic risk" and organize the largest bailout in the history of mankind. Somehow (hmmm ... politics maybe? Nah, can't be), other companies outside the financial industry such as General Motors, Freddie Mac (FRE) and Fannie Mae (FNM) also get bailed out. Since the government is a referee of money and does not itself "make" money, it is "we the people" who bailed out these companies. We'll see how they say "thank you" in a little bit.

All of the money that you earned from Jan. 1 to April 9, 2010, went to federal, state, and local tax obligations, according to taxfoundation.org. . So you and me worked in the fields for three months so we could send enough money to the King to operate our government and keep us safe. Well, at least some of us sent that money. In 2009, 47% of Americans paid no federal income tax. But I digress, as I tend to do.

How do those big banks and financial institutions say "thank you" for the helping hand? By foreclosing on homeowners, raising credit card rates, and tightening credit.

As regular readers of this column know, I'm no socialist with a pitchfork but something has to give. The best part of a double standard is you're always on the winning side.

I decried the bailout because it would create, to use the dead horse buzzword, a "moral hazard." Translation: Instead of curbing the behavior that caused the crisis, financial institutions know going forward they have a "put" or a net underneath them that encourages more risk-taking, not less. (See the Family Guy episode where death takes a vacation. Classic).

When a business makes a bad decision and decides to cut a loss it's called a "prudent business decision," even if this decision violates a contract. The business knows the downside but after evaluating the pros and cons believes that walking away is the best course of action. "Why throw good money after bad?" is the business axiom. Shareholders clap and say, " Thank you, don't ever do that again."

In July 2008, Dow Chemical (DOW) announced it would acquire Rohm and Haas for $78 a share. Good times. Market going up, a whiff of something brewing about housing but no worries. Rock on!

Then all hell broke loose. Cue the financial crisis. Dow CEO Andrew Liveris, acting in his fiduciary duty to his shareholders, wanted to walk away from the deal. He was going to be underwater in a big way and couldn't let that happen. Rohm and Haas, of course, said "Deal with it. You made an agreement, live up to it. We don't care if our share price went down, eat it."

Welcome to the exact same situation millions of homeowners currently find themselves in today. The key difference is that many of the institutions telling homeowners to "eat it" are the ones that homeowners bailed out, just like the German soldier at the end of Saving Private Ryan.

Spoiler alert! I knew he was going to kill him.

What is an underwater homeowner to do? He bought at the height of the market but now his home is worth significantly less than what he paid. But the homeowner has a fiduciary duty to people more important than shareholders: his family. Financial firms tell the homeowners to pay anyway. The mortgage modification program has been a complete flop (see health care, future of) and many homeowners are getting crushed. Welcome to the new moral hazard that if not addressed now, will result in the freefall of the housing market and a dark future for consumers.

This debate is raging in the housing sector today. Some homeowners simply use "jingle mail," or send the keys back to the lender, knowing banks are loathe to foreclose and take the loss on their books. Other underwater homeowners, citing a "moral obligation," continue to pour money into a losing investment that may take years or even a decade to break even. I have news for these folks when they come down from their pedestal: There are no morals in business.

How do I know this? Simple. Everything would be done with a handshake. It's not. Contracts lay out what's "moral" and "immoral" so to speak in a business transaction and what happens when one side acts outside those lines. There are remedies for one side and penalties for the other.

I come from the U.S. military where your word was your bond. You trusted the people in your squadron with your life or they weren't in your organization. Period. Unfortunately, or fortunately, I learned that this same type of trust and morals didn't exist or were extremely rare in the business world. In some ways, business was mentally worse than combat; getting "shot" in the back by people I thought I trusted was devastating.

Oh and by the way, you wanna bet that these same financial institutions are using our borrowed money to bet against us, meaning that the debt "we" are taking on to loan "them" is unsustainable? Count on it. If I were the "Fabulous Fab" over at Goldman Sachs (GS) I certainly would be.

Firing Line: If there were morals in business, the institutions that we bailed out after the financial crisis would be a little more understanding with homeowners who made bad decisions like they did and work with them. It wasn't too long ago they were in the same situation. Now the shoe is on the other hand.

I ONLY HAVE A 1ST DEED OF TRUST WHICH IS APPROX. 1 MILLION DOLLARS. I NEVER HAD A 2ND DEED OF TRUST ON MY PROPERTY. THE RECORDED FRAUDULENT ASSIGNMENT IS SIGNED BY A GOLDMAN SACHS EMPLOYEE, JOHN CRANDALL (CHECK THIS OUT: http://livinglies.wordpress.com/2010/04/02/john-crandall-litton-mortgage-promiss-solutions/)

I DISCOVERED THIS CRIMINAL ACT WHEN I HAD A TITLE SEARCH RAN ON MY PROPERTY LAST MONTH DUE TO THE COMMUNITY PROPERTY ISSUE CAUSED BY GOLDMAN SACHS. UNBEKNOWNST TO ME, I FOUND THE “SMOKING GUN”.

THESE LAST MINUTE FALSE ASSIGNMENT SCHEMES ARE DONE BY ASSIGNING FALSE DOCUMENTS FROM THE TRUE MORTGAGE HOLDER IN ODER TO OBTAIN THE PAYOFF FUNDS AT THE AUCTION BLOCK ONCE THE PROPERTY IS SOLD. THE STATE OF MASSACHUSEETS IS INVESTIGATING AND INDICTING THESE TYPES OF SCHEMES HEAVILY DUE TO THE “KATRINA LOANS” THAT GOLDMAN SACHS LEFT THEM WITH.

WHY GOLDMAN SACHS IS CAUSING ME HARM AND COUNTLESS OTHERS. IT’S PURE GREED! IT LOOKS LIKE THE MILLION DOLLARS THAT GOLDMAN SACHS MADE ON THE CREDIT DEFAULT SWAP FROM FORCING MY LOAN TO DEFAULT ON 5-11-09, MAY HAVE RUN OUT.

I HAVE BEEN IN LITIGATION WITH THESE CROOKS, SPENDING THOUSANDS OF DOLLARS IN ATTORNEYS FEES AND HAVE BEEN PROVIDED WITH MOCK HEARINGS SINCE FEB 2009, TRYING TO SAVE MY HOME.

WE NEED SOME JUSTICE HERE! OBAMA, I’M DISAPPOINTED IN YOU, WHAT ARE YOU DOING?
Visit my blog at http://bushnellcomplaint.blogspot.com/ to see the pending case information.