Fears Of Global Inflation On The Rise

With European public debt on the rise, fears about inflation though out the world continue to increase. Top economists are not discounting hyperinflation as a potential outcome in Europe, while the Bank of England Governor stated expectations that inflation would recede. See the following post from The Mess That Greenspan Made.

Wow. You’d think that we all just did a time-warp back to the 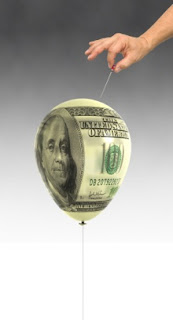 middle of 2008 based on today’s collection of inflation reports from around the world. Producer prices in the U.S. were down from March to April but are a full 5.4 percent higher than a year ago according to the Labor Department. It’s a good things those costs aren’t getting passed on to consumers because that would put real interest rates at … let’s not go there.

In Europe, where memories of hyperinflation from Weimar Germany are still vivid, they are petrified at the thought of where central bank money printing to fund the latest bailout might lead. Oh right, they say the bailout money is to be “sterilized” and won’t add to the money supply – we’ll see how that goes. Germany’s Der Spiegel notes in this report that the biggest danger from the bailout is a changed central bank.

There is a growing fear that a gigantic wave of debt will soon roll over Europe and the euro-zone countries will deal with it as elegantly and unscrupulously as they have so often done in the past — by allowing inflation to reduce their debts. These concerns are shared by more than just the notorious paper money skeptics who predict the return of hyperinflation.

Even serious experts like Joachim Fels, a top economist at Morgan Stanley, have no qualms about addressing the likelihood of such a development. Although it is an extreme scenario, says Fels, it certainly cannot be dismissed out of hand. At the very least, the central bank can apparently “no longer resist the temptation to use inflation to reduce the mounting public debt.”

The way things have been going lately, maybe it isn’t nearly as extreme as Mr. Fels thinks.

In the U.K., inflation just jumped to a 17-month high of 3.7 percent, up from an annual rate of 3.4 percent the month before, and you know what that means – Bank of England Governor Mervyn King has some ’splainin to do in the form of writing a letter new Chancellor George Osborne who surely has other things on his mind.

This story in the Telegraph has the details.

Mr King said today inflation was likely to fall back to its 2pc “within a year”, adding that inflation had been “somewhat higher than expected over the past year”.

The governor said the temporary factors were “masking the downward pressure on inflation” from the slack in the economy built up in a record recession.

Mr King added that policymakers had not ruled out further emergency support to the economy, potentially paving the way for more quantitative easing.
…
The retail price inflation gauge rose to 5.3pc from 4.4pc, versus forecasts for a rise to 4.9pc, the highest since July 1991. That was largely driven by base effects after the sharp fall in mortgage interest rates in 2009 was not repeated in 2010.

RPI includes more housing costs than CPI, which matches the European Union Harmonised Index of Consumer Prices (HICP), and is used to index many social security payments and some wages.

Yikes! When inflation hits five percent, maybe you ought to do more than just write a letter.

The consumer price index may rise about 3 percent in both May and June, the National Development and Reform Commission said on its website today. That would compare with April’s 2.8 percent gain from a year earlier, the biggest jump in 18 months.

Barclays Capital said May 11 that interest rates may rise this quarter if inflation accelerates to 3 percent, the level targeted by the government as the maximum for the full year. Chinese policy makers are weighing overheating risks, including surging property prices, against the threat of a renewed global slump triggered by Europe’s sovereign-debt crisis.

“Inflation is very likely to surpass 3 percent this month, which will back the central bank’s arguments for raising interest rates to better control inflation expectations,” Liu Li-Gang, a Hong Kong-based economist at Australia and New Zealand Banking Group Ltd., said today. “Rates are likely to rise in June.”

Consumer price inflation in the U.S. will be reported tomorrow.

Now are you sure you know the truth?
Subjects US Debt and US Income Tax. Oh, yes inflation is in the wind but for now Deflation.
Goldman Sachs and the crooks that ran it all seem to get a job in Government-do you know why?

I just signed up for your Nicaraguan real estate information.Can't wait to read