The continued denials by Ben Bernanke that the Fed is printing money appears to be doing more harm than good to public opinion. Bernanke argues that buying Treasury securities helps lower interest rates which makes the economy stronger. See the following post from The Mess That Greenspan Made.

The “We’re Not Printing Money” denials from Fed 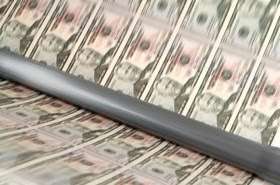 Chief Ben Bernanke are now starting to become tiresome and, in what would probably come as a huge surprise to the detached and myopic bunch at the central bank, these denials are surely not doing much good in bolstering public opinion about the need for the institution that they oversee despite the occasional defense of their practices (such as this) that only seem to push public opinion over to the Ron Paul camp that, for all but the dismal set, makes infinitely more sense.

Of course, common sense isn’t something that economists are overly endowed with and, had the Fed been able to keep asset prices from falling over the last ten years, the public would surely be much more willing to believe anything they say today, but retorts like this in Time Magazine are now doing more harm than good for Bernanke and crew:

Would it be beneficial to the economy if I created new dollars out of thin air whenever I wanted? If it isn’t good for me to do it, why is it good for you and the Fed to create new money at whim? —Jonathan DuPree, MARTINSBURG, W.VA.

The Federal Reserve is buying Treasury securities in order to lower interest rates, which in turn helps people buy houses and cars and promotes investment by firms. That leads to a stronger economy. These policies are not leading to increases in the amount of currency in circulation.

While West Virginia is not known to be a hotbed of cutting edge monetary policy theory, just based on the way the question was phrased, there’s a pretty good chance that Mr. DuPree doesn’t think that the Fed Chief is laboring over a printing press that spews $100 bills.