Why A Gold Bubble Is Impossible

Jeff Nielson explains why he thinks that it is impossible for gold to become an asset bubble. With governments showing a preference for hyperinflation rather than defaulting on bonds, the continued devaluation of paper currencies will drive gold much higher he writes. See the following post from The Street.

In an ocean of propaganda, there are few forms of 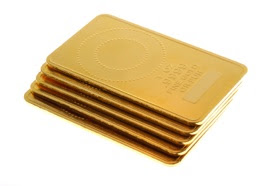 disinformation as annoying as the endless "gold bubble" babble. Typically, precious metals commentators will refute such nonsense by pointing out that, compared to other commodity prices today, and compared to the gold price itself in 1980, gold is still unequivocally "cheap" and does not represent an asset bubble in any respect.

Despite the quintupling of the price of gold off of its absolute bottom, gold is arguably just as "cheap" today as it was when the price was below $300/oz. The reason is simple: the fiat paper currencies in which the price of gold must be expressed have been debauched/diluted (mostly by Western central banks and the governments they represent) just as fast as the price of gold has been able to rise.

Indeed, more worrisome is the fact that most Western governments look vulnerable to debt-default in their futures, with that fate all but inevitable for several European governments and (of course) the United States. Even worse than that, however, is that the actions of these governments seem to make it abundantly clear that they are prepared to embrace hyperinflation (and a de facto default through driving their currencies to zero ) rather than formally defaulting -- and imposing the "hit" on bond-holders, which is the only path to solvency for several of these nations.

As the probability of default-through-hyperinflation moves from being likely to near-certain, this directly implies a corollary in the precious metals market: that it is impossible for gold to become an asset bubble.

There is nothing either radical or surprising in such a conclusion.

In fact, I have already implied this in a previous two-part series on precious metals and hyperinflation. It is a matter of simple arithmetic that as currencies go to zero, the price of hard assets go (literally) to infinity -- with gold and silver being at the top of the list of "hard assets." This is the same thing as saying that gold (and silver) won't be "fairly valued" until the price reaches "infinity." And since (by definition) any finite number we are capable of expressing is less than infinity, it is mathematically impossible for the price of gold to ever reach a level where gold would represent an asset bubble.

The only development that could negate this trend is if Western governments, and especially the U.S. (whose dollar is still the world's "reserve currency") were able to put an end to their spiraling debts and spiraling money-printing. In terms of the economic fundamentals of these nations, I have already been crystal-clear in previous commentaries as to the only policies that can restore these economies to a solvent basis (even after a debt-default): a four-day work week to put an end to massive, structural unemployment; and a taxation overhaul that disgorges the $10's of trillions in idle wealth being hoarded by 21st century Western misers.

Without moving to a four-day work week, no Western economy can possibly have enough taxpayers to support even a minimal level of government. Again, this is just simple arithmetic. With more old people to support (by a vast margin) than at any time in our societies' histories, we can't expect to pay out the vast entitlements that pampered baby-boomers expect with far fewer taxpayers than at any time in history.

Similarly, our economies are certainly doomed to implode if the despicable "hollowing-out" of our wealth (from income taxation ) is not reversed. It is a matter of unequivocal arithmetic that all income taxation systems suck all the wealth out of the pockets of the poor and middle-class, and deposit that wealth into the hoards of the ultra rich.

It is also one of the most fundamental principles that economic health is a direct function of the "velocity of money" in our economies. In other words, in any/every capitalist economy, our credit-based "growth" is only sustainable if money is vigorously spent and re-spent as it moves from one hand to the next.

The obvious problem with the vast mountains of wealth now hoarded by the rich is that this wealth barely moves at all. In economic terms, it makes very little difference if a $100 bill comes into the possession of the ultra-wealthy, or whether we simply light it with a match and burn it. This wealth is disappearing forever from being "circulated" in our economies.

Indeed, wealth is literally the "life-blood" of our economies, and just as an animal will become anemic (and eventually die) from loss of blood, so too it is absolutely certain that our anemic economies will implode if these vast hoards of wealth are not disgorged and recirculated in our economies.

Having already laid-out the only policy options that I believe will lead us back from the brink of economic self-annihilation, let's now lay out the parameters that currently exist.
Given these parameters, it is 100% certain that every Western currency is headed to zero -- i.e., hyperinflation across the Western world. This economic conclusion translates into a "fair market " price of gold of "infinity", and thus there is no price-level at which gold could ever represent an asset bubble.

This long-term (near-term?) certainty for our economies also implies several things for our investing strategy for precious metals. With the speed steadily increasing at which our currencies/economies are moving toward hyperinflation, while the window to veer off of this path rapidly closes, there is no reason to expect any significant, future selloffs for gold or silver.

Investors who are waiting for a "good buying opportunity" for precious metals should completely divorce themselves from such thinking. The increasingly shallow pull-backs that have resulted from the most recent ambushes of this market are as close as we are likely to get to any future "sale" on precious metals.

For those who have just started their own accumulation of bullion, you simply do not have the luxury of hoping for some windfall buying opportunity. Such people need to aggressively engage in dollar-cost averaging, in order to convert as much of their wealth to precious metals as possible while prices still remain at "moderate" levels.

As I regularly remind readers, investing in "physical" bullion can (and should) be augmented through investing in gold and silver miners. These companies can not only be expected to provide natural leverage to the price of bullion (as do commodity producers), but they are ideal vehicles for retirement accounts.

While the speed of our economic disintegration is terrifying, at least this provides us with clarity regarding our own strategies for surviving the economic cataclysm being created mostly by bankers and politicians. All bonds must be liquidated, before Western bond-bubbles suffer their inevitable, horrific implosions.

Regardless of whether Western governments formally default today, or informally default (tomorrow) through driving their currencies to zero, anyone foolish enough to be in the bond market is guaranteeing that (at best) they will receive nothing but pennies on the dollar for this worthless paper. Similarly, it is equally suicidal to hold any significant quantity of wealth in cash (i.e., the bankers' paper confetti). Even those intent on having a readily available "emergency fund" should be holding no more than a one- to two-month reserve of banker-paper.

In any "emergency" where we are suddenly desperate for liquidity, our bullion will certainly qualify as a liquid asset. Indeed, the only reason for holding any quantity of cash at all is that, in the case of some short-term downward "blip" in the price of gold or silver, we would not want to be forced to liquidate any of our bullion at give-away prices.

Those of us who hoped that the Crash of '08 would frighten Western leaders into pulling back from their fiscal and monetary policies have been severely disappointed. Whatever the cause of this economic suicide, more than ever, a "cure" appears to be utterly beyond the capabilities of these "leaders."

This is the shabby secret of the welfare statists' [i.e., the bankers] tirades against gold. Deficit spending is simply a scheme for the confiscation of wealth [emphasis mine]. Gold stands in the way of this insidious process. It stands as a protector of property rights.

Reject the absurd propaganda that still seeks to frighten individuals away from their only economic salvation. Flee the bankers' paper bubbles, which (like all Ponzi-schemes) must end in utter disaster for all those trapped in their markets. The economic "plague" that has been unleashed upon us is now obvious. The only "antidote" for that plague is even more obvious.

This post by Jeff Nielson been republished from The Street, a site covering financial news, commentary, analysis, ratings, and business and investment content.
Posted by: NuWire Investor @ 5:50 AM