A survey of the world's central bankers found that almost one quarter expect gold to become the most important reserve asset in 25 years compared to about half who expect it to be the US dollar. This reflects a recent shift in thinking in response to the growth in spending, borrowing, and printing of the dollar by the United States. See the following post from The Mess That Greenspan Made.

Apparently, after what’s happened to the glo 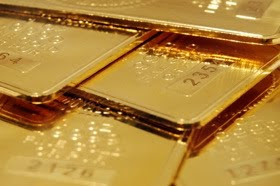 bal financial system over the last few years, the world’s central bankers have had a dramatic change in thinking about gold bullion, formerly known as the “barbarous relic”. A metal once considered to be a remnant of a bygone era is now increasingly viewed as not only relevant, but “the most important” central bank asset.

The details are in this Financial Times report($) (alternate link):

Even so, the more positive trend towards gold was highlighted recently by UBS, the Swiss bank, in its annual poll of central bank and sovereign wealth funds. It found nearly a quarter of central banks believed gold would become the most important reserve asset in the next 25 years.

At its annual seminar for sovereign institutions, UBS surveyed more than 80 central bank reserve managers, sovereign wealth funds and multilateral institutions with more than $8,000bn in assets. The results were not weighted for assets under management.

Asked what the most important reserve asset would be in 25 years, roughly half of polled officials chose the US dollar, but 22 per cent chose gold. Bullion was the second most popular response, well above others such as Asian currencies or the euro.

Not surprisingly, given the combination of U.S. dollar hegemony and a seemingly insatiable desire in Washington to borrow, print, and spend our way back to the prosperity we once knew, the appeal of gold over paper money is strongest in emerging market economies where the standard of living is still rising and the future still seems brighter.