The Case For Economic Depression

Moses Kim makes the case for the economy being in a depression by citing the unusual drop in real final sales and the higher than usual drop in employment-population ratio. Although economists don't agree with what qualifies as a depression, severity and duration are key factors. See the following post from Expected Returns.

Now that the economy is showing signs of slowing, talks of a double-dip recession are growing louder by the day. I must admit I'm not a big fan of the double-dip recession thesis since it presumes that our economy actually recovered. I believe what we are currently experiencing can more accurately be described as a depression.

So what is a depression? While economists don't agree on what constitutes a depression, it's safe to say that depressions are determined by two variables: severity and duration. The data shows that on both counts the current downturn is unlike any recession we've seen since WWII. I think it's pretty clear we are experiencing at least a "soft" depression. 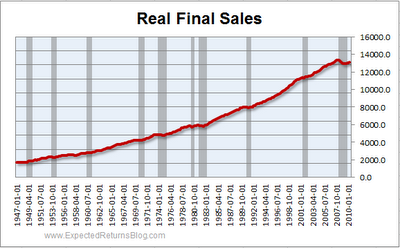 Generally recessions end when real final sales are either flat or rising from the beginning of the downturn. However in the current downturn, real final sales are down 1.6%, which is an unprecedented drop in a supposed recovery. The steep drop in real final sales reflects the inordinate effect of inventory restocking on GDP over the past year. Now that the inventory cycle has run its course, GDP is likely to come under pressure; we may very well see negative prints in the second half of 2010. 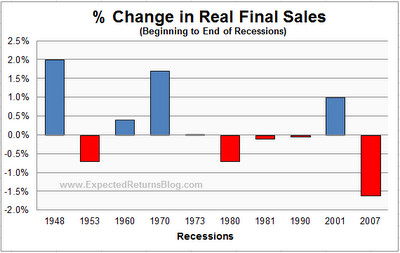 If there's one indicator economists focus on as a harbinger of a recovery, its GDP growth. Given that we have seen 4 straight quarters of GDP growth, many economists believe the recession is over.

However, one must consider the time in which it takes to create real GDP growth. Depressions are depressions for a reason: they are drawn-out affairs characterized by sub-optimal growth. Judged against prior recoveries out of recessions, the current recovery is very sluggish. 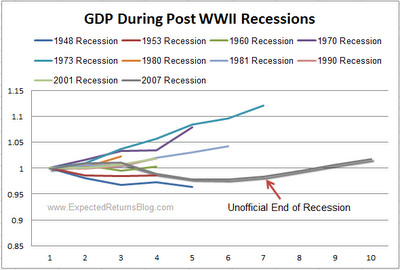 Another obvious factor when judging GDP growth is the debt factor. Our leaders inundate us with mindless drivel about GDP growth all the time. Unfortunately, all growth is not created equal, with debt-financed GDP growth being the most harmful for our long-term prospects.

It goes without saying that there can be no recovery without an upturn in employment. The unemployment situation hasn't materially improved since the absolute trough last year. It is safe to say that this is the severest downturn in employment we've seen since the Great Depression. 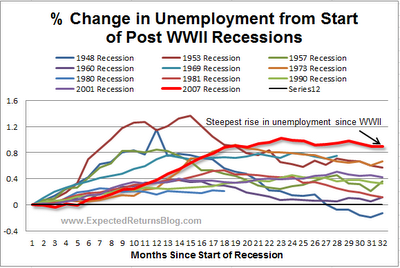 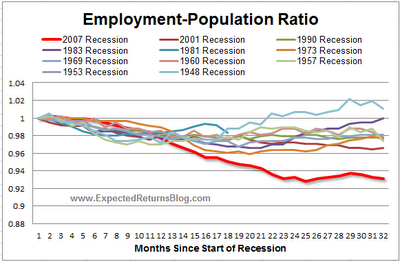 History gives us most of the tools we need to understand the current situation. The Great Depression wasn't a continuous downturn, but a volatile period with many false recoveries. There was a 2-3 year period when the public was convinced a sustainable recovery arrived. Tremendous government stimulus courtesy of FDR created a false recovery that led to a second major downturn.

This article has been republished from Moses Kim's blog, Expected Returns.
Posted by: NuWire Investor @ 5:56 AM