New Commerce Department data reveal that housing starts fell 5% for the month of August, suggesting more bad news in the near term for construction and new-home growth in the U.S. housing market. The good news, however, is that permits were up 3.2%, which could indicate a small uptick in building for the coming months. Even so, construction levels remain 75% lower than during the housing boom seen in 2005, before the onset of the recession and the global financial crisis. For more on this continue reading the following article from Tim Iacono.

The Commerce Department reported(.pdf) that housing starts fell in August and permits for new construction rose, however, instead of showing the same old chart of how the residential construction has been dead and will likely continue to be that way for the foreseeable future, this approximation better expresses the current reality. 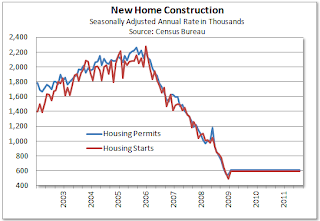 When looking at the actual data below, it’s clear to see that there’s not a whole lot of difference between the two charts, the only real question being if and when a zombie housing market will someday arise.

The official data is as follows. Housing starts fell 5.0 percent in August to an annual rate of 571,000 units and permits for new construction, a key leading indicator for the housing market, rose 3.2 percent to a 620,000 annual rate. 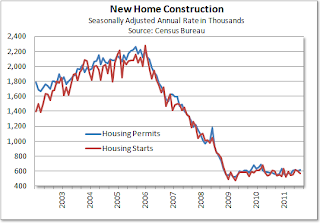 Current levels of home building activity in the U.S. represent a decline of about 75 percent from the highs in 2005 and remain near record lows for a data series that goes back a half century, one that is not adjusted for population growth.

the graphics are awesome and gives a brief introduction to how serious this financial crisis is. No exports no income and no mortgage repayments.