The report for sales of existing homes in May fell 3.8% for the year along with home values, which also fell by 4.6%, following a year-over-year decline. Analysts are calling it the sign of a “double dip” recession for the U.S. housing market as interest in buying dried up along with last year’s homebuyer’s tax credit. Many factors are contributing to the drop, from a waning economy and job market to increased costs in fuel that are in turn driving up consumer costs on the whole. For more on this continue reading the following article from Tim Iacono.

The National Association of Realtors reported that existing home sales fell 3.8 percent in May to an annual rate of 4.81 million units and home values continue to decline on a year-over-year basis, the median price down 4.6 percent from a year ago to $166,500. 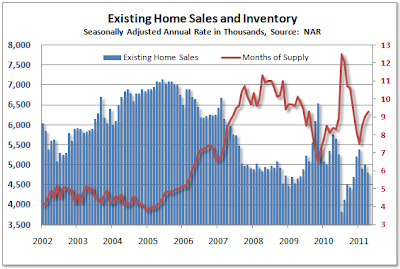 Distressed home sales accounted for 31 percent of all sales in May, down from 37 percent in April, and all cash transactions dropped from 31 percent t0 30 percent as more traditional homebuyers entered the market in the spring, the beginning of the seasonally strong mid-year months for property sales.

The months of supply metric rose from 9.0 months to 9.3 months in what many see as further confirmation of the ongoing “double-dip” in housing, but NAR chief economist Lawrence Yun remains optimistic, noting that temporary factors are now holding back the market. “Spiking gasoline prices along with widespread severe weather hurt house shopping in April, leading to soft figures for actual closings in May,” he said. “The pace of sales activity in the second half of the year is expected to be stronger than the first half, and will be much stronger than the second half of last year.”

Yes, we’re starting to hear a lot about a “second half recovery”, that is, after the first half of 2011 has proved to be such a disappointment.

This blog post was republished with permission from Tim Iacono.
Posted by: The Mess That Greenspan Made @ 2:31 PM

Email ThisBlogThis!Share to TwitterShare to FacebookShare to Pinterest
Labels: economy, housing, US economy