The Commerce Department reported that retail sales rose for the ninth straight month in March. Learn about which areas grew the most in this full blog post by The Mess That Greenspan Made.

While Americans may be complaining about rising gasoline prices and expressing their growing displeasure via plummeting consumer confidence surveys, they’ve not stopped spending money as the Commerce Department reported(.pdf) that retail sales rose for the ninth straight month in March, up 0.4 percent after an increase of 1.1 percent in February.

Yes, gasoline station sales surged, up another 2.6 percent in March and now almost 17 percent higher than a year ago, but other gains were broad based including notable improvements in housing related categories. 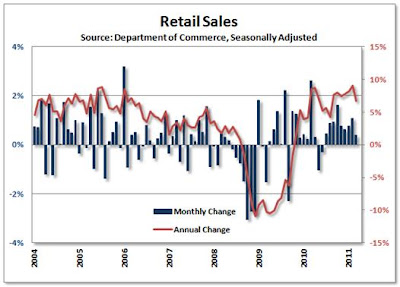 Auto sales were down 1.7 percent last month, but this follows many months of gains. Excluding autos, sales gained 0.8 percent and, excluding both autos and gasoline, March sales were up 0.6 percent after rising 0.9 percent in February. One important caveat here is that these figures are not adjusted for inflation, so, as is the case for gasoline, some of the sales gains in other categories can be attributed to higher prices.

This post was republished with permission from The Mess That Greenspan Made.