EURUSD and USDJPY Could Be Affected by U.S. Government Shutdown

As budget negotiations continue between Democrats and Republicans, there is fear that a government shutdown may be inevitable. This leads some to wonder how currency will be impacted. Read more about this in the full post by Kathy Lien.

There has been a lot of talk about the possibility of a U.S. government shutdown. Republicans and Democrats in Washington continue to clash on budget negotiations, raising the risk of the first government shutdown since 1995 during the Clinton Administration. Congressional leaders are in deep discussions and a shutdown could be avoided, but with the U.S. government telling federal agencies to be prepared to implement contingency plans, it is important for currency traders to be prepared as well by knowing how the U.S. dollar could react to the shutdown.

We have been down this road before 15 years ago and based upon the price action of the EUR/USD and USD/JPY at the time, investors are not too worried about the implications of a government shutdown on the economy. When the government was shut down in Nov 1995, both the EUR/USD and USD/JPY barely budged. When a second shutdown occurred during the Clinton Administration in December of that year, the dollar actually rallied against the Japanese Yen before normal government operations were resumed. The main reason is because any shutdown is expected to be so temporary that it will pose no risk to the U.S. sovereign debt rating. It will also not scare investors away from buying U.S. debt. The only major economic implication is that Federal workers won’t be paid during the period that the government is shut down. If an agreement isn’t reached by midnight on Friday, the government will shut down all non-essential government services. 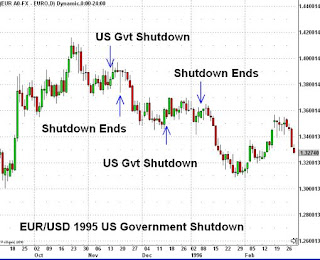 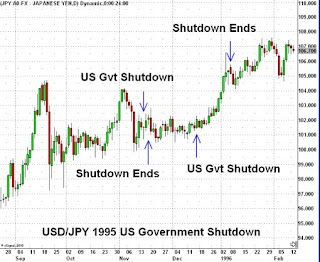 This blog was republished with permission from Kathy Lien.
Posted by: Kathy Lien @ 8:38 AM