Housing starts fell 22.5% in February compared to January, as homebuilders anticipated weak demand. Considering the millions of homes out there still waiting to be sold, this is good news for the resale market, however, it shows how little confidence homebuilders have in demand recovering any time soon. For more on this, read Tim Iacono's post below.

The Commerce Department reported(.pdf) that housing starts plunged 22.5 percent last month, down from an annual rate of 618,000 in January to just 479,000 in February, a level just 2,000 above the record low seen in early-2009 during the financial market crisis. 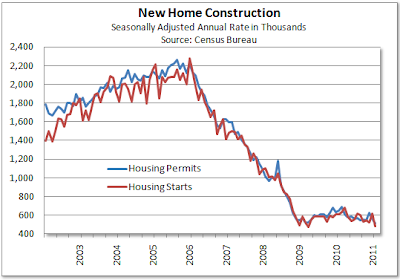 Permits for new construction also fell, down 8.2 percent from a rate of 563,000 to a new all-time low of 517,000, as the nation’s homebuilders continue to be challenged by weak demand, tighter lending standards, and a glut of unsold homes due to a new wave of foreclosures after last year’s “robo-signing” fiasco that temporarily stemmed the flow.