Market expectations for inflation in the decade ahead has increased to 2.3 percent, although current inflation was measured at 1.1 percent last month. The crowd is expecting slow economic growth in 2011, which will likely mean little change in monetary policy. See the following post from The Capital Spectator. 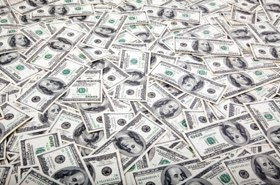 e interest rates. The market is expecting no less. Fed fund futures expiring next November are priced for only a slight rise in Fed funds—roughly 38 basis points vs. the current target rate of zero to 25 basis points. Cheap money won't last forever, but almost no one thinks higher rates are imminent. Still, it's not too soon to consider the future, including the possible triggers that launch the Fed's exit strategy.

The leading influence on the Fed's monetary policy is probably the labor market. But with the unemployment rate at 9.8% as of last month—only slightly below the 10% peak reached in the wake of the Great Recession—there's little chance that the central bank is set to hike rates any time soon.

Will the December update on payrolls (scheduled for release on January 7) offer better news? Yes, according to the consensus forecast, which predicts an improvement in private nonfarm payroll growth for December—a gain of 100,000, according to Briefing.com. That's still slight, but if it's accurate it would at least mark an improvement over November's disappointing report.

Inflation is also a factor in the Fed's monetary policy, of course, but here too the outlook is relatively tame. Consumer prices overall are barely rising on a monthly basis, according to the government's official calculation. Measured at an annual pace, CPI rose by 1.1% for the year through last month, well down from the 2.7% rate at the start of this year. Disinflation, it seems, is still the path of least resistance.

Market expectations, however, are inching higher when it comes to inflation forecasts. Based on the yield spread between the nominal and inflation-indexed 10-year Treasuries, the market anticipates inflation of 2.3% for the decade ahead, up from around 1.5% in late-August.

The question, of course, is whether the market's outlook for inflation keeps rising or remains stable. By some accounts, this is a critical variable for second-guessing the timing of the Fed's exit strategy. Former Fed governor Lyle Gramley (currently a consultant for the Potomac Research Group) explains via The New York Times that if the market sees inflation rising over the Fed's unofficial 2% target rate for an extended period, that could inspire a tighter monetary policy.

For the moment, the market's low-2% inflation forecast is more or less in line with the Fed's long-range target. But one unexpectedly strong employment report, or a sharp jump in monthly consumer price inflation, could dramatically alter perceptions.

What are the odds for an outlook adjustment? Low, but not necessarily zero. "2011 is going to look a lot like this year did in the sense of, we'll see growth, but it is going to be sluggish, it's going to be stop-and-go," says economist Heidi Shierholz of the Economic Policy Institute via The Nightly Business Report. "It's not going to be fast enough to start bringing the unemployment rate down substantially."

That's probably a rough estimate of the consensus outlook. The crowd's expecting sluggish improvement, which implies little or no change in monetary policy. At some point, that forecast will be wrong, however. As Hyman Minsky famously warned, stability in economics is unstable.