The Importance Of Staying Objective When Investing

Moses Kim uses the example of the inaccurate government projections that predicted the stimulus plan would immediately reduce the unemployment rate to suggest that investors should be careful about listening to the media and politicians. He writes that while people tend to pick out data that supports their point of view, it is important to look at the data objectively and keep an open mind. See the following post from Expected Returns.

Sometimes I wonder if I’m the only person in the world who remembers the prognostications of our leaders and points out how wrong they were. For instance, let’s take the Recovery Act of 2009. Nobel laureates claimed in a letter to Congress prior to the passing of the Bill that the plan “proposes important investments that can start to overcome the nation’s damaging loss of jobs.” This came at a time when unemployment was at 7.7%. Now it is at 9.8%. So not only were Nobel laureates wrong, but the tide of opinion has shifted overwhelmingly to the view that our economy is recovering. But wouldn’t an economy that required a Recovery Act at 7.7% employment need one at 9.8% unemployment? Unfortunately, we live in a world where the thoughts of Americans are held hostage by the media. Below I’ve attached the government’s projections at the time of the Recovery Act as to its potential effect on unemployment. 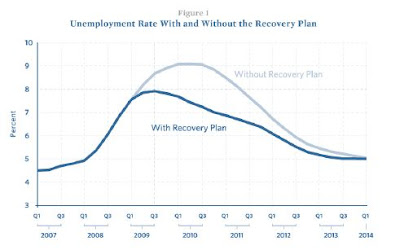 Could they have been more wrong?

You can see why I ignore mainstream analysis and block out the mind-numbing rhetoric of politicians. Very few public figures have the courage to think for themselves and go against the crowd. It is far easier to be incorrect while parroting consensus opinion than it is to be incorrect while warning of a grave potential danger. There are actually studies that have shown that the vast majority of people cling to their narrow points of view till the bitter end. It is a very small percentage of the population that has what is called a “flexible mind.” It is also a very small percentage of the population that are “lifelong learners.” I personally think it is a tragedy that most people think they know it all by the time they finish their formal schooling; they are missing out on attaining a fresh perspective of the world.

In the field of finance and economics, you will witness, up to the point of outright comedy, the tendency of man to be mentally inflexible. Let me give you an example. Most people are firmly entrenched in the inflation or deflation camp. Not many people will look at the data objectively and tell you that there can be simultaneous deflationary and inflationary trends. There are people in both the deflation and inflation camp that define inflation based strictly on money supply. But money supply can only be going in one direction at a given point in time, so someone’s thesis is always wrong. It is at this point that the incorrect party will handpick data that prove their thesis is correct. Deflationists will point to falling real estate prices while ignoring rising consumer prices. Inflationists will do the exact opposite.

I have no problem putting on trades that make no sense to the mainstream. I can be bearish on the economy and still go long stocks. I can be bearish on real estate but still think there will be inflation. I don’t have a fixed, rigid model of the world that I feel the markets must cater to; that would be just plain stupid.

If economic forecasting were as simple as people make it out to be, then quite frankly, I would be retired by now. You must always think in a dynamic way and understand that there are so many shades of grey in investing. When political unrest in the United States really picks up steam, most people will become very bearish on our future. I’ll instead look ahead to a brighter future and invest accordingly. Crises are often resolved in extremes. Until then, I will try to keep an open mind about what the future holds.