Obama's pledge to a new era of regulating corporate American and Wall Street has been little more than talk according to Gary Weiss, writing in The Street. One of the targets of Wall Street regulation is naked shorting, which according to one study from the University of Oklahoma, is less harmful than regulators think. See the following post from The Street.

The other day I was reading an article in a scholarly 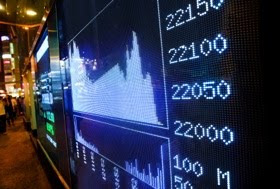 journal on securities regulation and came across one of my favorite subjects, naked short selling.

I'm fascinated with naked shorting because it's a fraud -- exaggerated by frauds who bombard supine regulators with emails and used as an excuse by CEOs who shouldn't be running chicken coops, much less public companies.

Like many articles by serious scholars who have examined the practice, this one, by University of Oklahoma Finance Prof. Pradeep Yadav, found that fear of naked shorting (shorting stocks without actually borrowing them) is vastly overblown. Yadav took the argument one step further, saying that naked shorting may actually be a good thing. I'll be coming back to that in a moment because what he says is interesting, in a kind of academic way, even though it's not in the slightest bit important.

That's right. It doesn't matter. He might as well have written his article on a slip of paper, put it in a bottle and thrown it into the ocean, for all the impact it's going to have. It's factual, it's based on data and not on political pressure, so it will have no effect whatsoever on our spineless watchdogs at the Securities and Exchange Commission, or on whoever is running Capitol Hill nowadays.

It won't matter because it symbolizes the totally FUBAR character of securities regulation, two years after the greatest financial calamity in most of our lifetimes.

As I read that article, an image popped into my head. It was Barack Obama --pledging, but not implementing, a new era in regulation of Corporate America and Wall Street. Yet here I was, reading that a major regulatory priority of the SEC is a total waste of time, and knowing that the time-wasting will continue with great force under SEC chairperson Mary Schapiro.

It's getting to be ridiculous, so absurd that some of our most staid media organs are beginning to realize that the Obama administration's approach to managing the financial markets is a laughingstock. Just the other day, U.S. Attorney General Eric Holder announced a "financial fraud initiative" consisting largely of warmed-over press releases and prosecutions that were commenced during the Bush administration. It was such a blatant public relations stunt that it was promptly labeled as such by the financial press. Bloomberg and others exposed the "financial fraud initiative" as a fraud of its very own. The public already knows not to trust the government. Flimflam PR stunts such as this one at least offer us a useful reminder of why," said Jonathan Weil of Bloomberg.

Another reminder is Prof. Yadav's article on naked shorting in the newsletter of Notre Dame's Center for the Study of Financial Regulation. I've been fascinated with naked shorting for years because it is the headless horseman of securities offenses: Scary, but firmly mythological. It has widely been blamed for everything from the failures of individual penny stocks to the entire market collapse in 2008. Yet, on closer examination, it tends to vanish (except in the diseased brains of conspiracy theorists).

For years, culminating in the post-crash hysteria of 2008, the SEC took a series of escalating steps aimed at naked shorting, without figuring out beforehand whether naked shorting was worth taking steps against. NSS was widely blamed for "attacking" the stocks of Lehman Brothers and Bear Stearns -- notably by executives of sterling credibility such as Dick Fuld of Lehman and Alan Schwartz of Bear Stearns. Many gullible congressmen and a few gullible journalists believed them. Yet on closer examination -- poof!

A May 2009 study of "fails to deliver" statistics by the aforementioned Yadav and other researchers found no evidence that any financial stocks were attacked by naked shorting. That might explain why not a single one of the books that have come out on the financial crisis blame naked shorting for the decline in bank stocks in 2008.

It's not even mentioned in the recently published Griftopia by Matt Taibbi, who wrote a lengthy takeout in Rolling Stone on the menace of naked shorting, quoting various regulars on the conspiracy circuit and splattered over the pages of his magazine in October 2009. "A scheme to flood the market with counterfeit stocks helped kill Bear Stearns and Lehman Brothers -- and the feds have yet to bust the culprits," said the deck below the headline of "Naked Swindle." Yet not a word on this horrible assassination plot, this "counterfeit stock" flooding, appeared in Griftopia.

By the way, note that the University of Oklahoma study was published back in May 2009, five months before the Rolling Stone article appeared. The article, which made no mention of the study, was widely quoted and contributed to the climate of hysteria over short selling. The Oklahoma study's impact on financial regulation, Congress, or anything? "Bupkis" is the word that comes to mind.

The same word is eminently usable today, in contemplating Prof. Yadav's latest article. He contends that "an increase in naked shorting significantly reduces spreads, order imbalances, positive pricing errors, pricing error volatil¬ity and stock price volatility." However, you've got to give the SEC credit. When it banned naked shorting in the summer of 2008, it "reduced pricing efficiency and liquidity." Attaboy, SEC!

Notice that I'm not saying "attaboy, Christopher Cox" who headed the SEC at the time, because it's inconceivable that his successor would have done a thing differently. Regulators are mired in the muck of perma-mediocrity, out of which they are not getting.

This post by Gary Weiss has been republished from The Street, a site covering financial news, commentary, analysis, ratings, and business and investment content.
Posted by: NuWire Investor @ 5:48 AM