Why The Fed Pays Interest On Reserves

Economist Mark Thoma discusses why the Fed doesn't just lower the interest paid on reserves to zero. He writes that paying interest on reserves doesn't significantly hurt lending and is a safety net for inflation. See the following post from Economist's View. 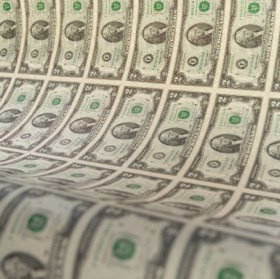 First, on whether paying interest on reserves is a constraint on loan activity, the supply of loans is not the constraining factor, it's the demand. Increasing the supply of loans won't have much of an impact if firms aren't interested in making new investments. Businesses are already sitting on mountains of cash they could use for this purpose, but they aren't using the accumulated funds to make new investments and it's not clear how making more cash available will change that.

Third, this a safety net for the Fed with respect to inflation. Paying interest on reserves gives the Fed control over reserves they wouldn't have otherwise, and control of reserves is essential in keeping inflation under control. If, as the economy begins to recover, the Fed loses control of reserves and they begin to leave the banks and turn into investment and consumption at too fast a rate, then inflation could become a problem.

But by changing the interest rate on reserves, the Fed can control the rate at which reserves exit banks. The incentive to loan money is the difference between what the bank can earn by loaning the money or purchasing a financial asset and what it can make by holding the money as reserves. Suppose, for example, that the Fed raises the interest rate on reserves to the market rate of interest. In that case, banks would have no incentive at all to make loans and would instead just hold the reserves.

Thus, though I don't think paying interest on reserves has much of an effect on loan activity right now, even if you believe it has, this is the price that must be paid for the ability to do QEI and QEII. If the Fed did not have this tool available, it would be much more fearful about its ability to control inflation, and much less likely to try to use unconventional policy to spur the economy.

Update: In comments, Andy Harless correctly points out that the Fed could cut the rate it pays on reserves to zero now, but still have the authority to raise rates later as necessary to help to fight inflation. As I noted in a reply to Andy, I agree, but the Fed does not -- I meant to, but forgot to include Bernanke's worries that cutting the rate to zero would cause problems in the federal funds market. Bernanke's argument is:

“The rationale for not going all the way to zero has been that we want the short-term money markets, like the federal funds market, to continue to function in a reasonable way,” he said.

“Because if rates go to zero, there will be no incentive for buying and selling federal funds — overnight money in the banking system — and if that market shuts down … it’ll be more difficult to manage short-term interest rates when the Federal Reserve begins to tighten policy at some point in the future.”

The argument itself is a bit hard to swallow and I don't buy it, prior to the recession the rate was zero and the markets functioned fine. But from the Fed's perspective that doesn't matter -- they seem to believe that it is necessary to pay something on reserves to prevent problems in the overnight market for reserves. Thus, in the Fed's view, paying a quarter of a percent right now is a necessary part of this policy, a policy that gives them the comfort they need to employ quantitative easing. The Fed may or may not be correct about the impact on the overnight federal funds market, but it holds all the cards and as a practical matter, if you want QEII, then this is part of the bargain.