Despite poor public sentiment about bank bailouts, the final bill for the Troubled Asset Relief Program is now projected to be far less than earlier estimates. AIG has worked out a deal to start paying back the $70 billion they owe, which decreases the projected losses from TARP to around $50 billion at most. See the following article from The Street.

It's too soon to know how history will judge TARP, b 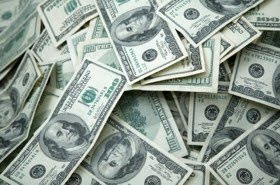 ut the government isn't waiting for that history to be written. The Troubled Asset Relief Program -- which on Main Street is about as toxic as the toxic lending practices that ushered it into existence -- was consigned to history over the weekend. Not coincidentally, the debate has heightened about whether TARP may have actually been a fairly good, or at least benign, investment.

No one is saying that the TARP investment was like getting into Google(GOOG_) when its shares fell to $262, or Apple(AAP_) after its shares fell to $82 back in November 2008. Both those tech plays would have been better investments for $700 billion of U.S. government money from a pure portfolio perspective. Apple shares have near-quadrupled since then, and Google shares have doubled.

So no one can say that former Treasury Secretary Hank Paulson should be appearing on Fast Money.

It doesn't matter if TARP isn't a massive a loss for the U.S. tax payer as it once was predicted to become. It still should have never been created. Or should it have been?

Last Thursday, the government announced that it had worked out a deal with AIG to begin repaying its massive $70 billion bailout. At a larger level, the White House said last Thursday that projected losses from TARP may be $50 billion at most. That's a loss not worth trumpeting, as a loss is a loss when it's at the expense of the taxpayer -- but it's far less than the initial predictions for the TARP price tag. In the middle of last year, the government was predicting that TARP might cost $341 billion.

Was Main Street too hard on TARP? For one, TARP never even came close to tapping the $700 billion earmarked for bailouts. The Treasury doled out about $387 billion in the end, and a TARP 2.0., which was proposed to the tune of another $750 billion, was never needed.

In fact, the government view of TARP has been getting better since May.

In August, the Congressional Budget Office reduced its TARP loss projection to $66 billion. It had once been higher than the administration's $341 billion estimate.

By May, when the government began planning the sale of its Citigroup(C_) stake, the estimate for the ultimate TARP price tag was reduced to $105.4 billion by Obama's bean counters.

Also in May, the Treasury was predicting that TARP losses related to the AIG bailout would be $3 billion less than anticipated.

The government's investment in the big banks has already paid off, and not just the Citi stake. Treasury has pocketed roughly $25 billion from dividends and stock warrant sales.

All of the TARP rosy scenarios are based on the government being able to continue to get good prices for its stake in bailed out companies, like Citigroup and AIG, and the automakers. That's a process that will play out over some time. AIG is currently shopping an IPO of its Asian-based operations in Hong Kong and reports on Monday were that it would have to settle for a lower deal value than it originally wanted.

For the sake of investment comparison, it would have been for easier to invest $400 billion in Apple and Google shares in November 2008 and cash those gains in now to the tune of $700 billion or so. That might not have saved the economy, if that's what TARP did.

Not every aspect of TARP has been an unrivaled, or even minor success, or less than worst-case scenario in actuality. The TARP mortgage modification program, HAMP, has turned out to be a loser of an idea. Some politicians have been given the heave-ho by voters as a result of TARP support, too.

Yet with the Treasury now estimating that TARP could break even, or turn a profit -- or at most lost reckons that taxpayers will lose less than $50 billion -- TARP haters do need to take a step back and consider whether their TARP hatred was on principle or based on doing the math.

For those standing on anti-TARP principle, the ground is still firm. Too much government intervention isn't an argument based on a final bill being revised lower for the taxpayer.

For those who joined the "I hate TARP" party based on the numbers, though, a final price tag from TARP that is actually, and suddenly, a tidy profit for the federal coffers, begs TARP haters to take another look at the toxic government bailout program.

This post by Eric Rosenbaum has been republished from The Street.
Posted by: NuWire Investor @ 5:57 AM

Email ThisBlogThis!Share to TwitterShare to FacebookShare to Pinterest
Labels: TARP