The price of gold is nearing the $1300 level and may go significantly higher if a debt crisis occurs and inflation takes hold. A debt crisis would result in investors selling off bonds and moving significant capital into gold. See the following post from Expected Returns.

Economic events continue to play out more or less a 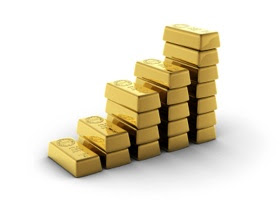 s I expected. Home prices have declined on a seasonally adjusted basis for two straight months, with prices down 3.3% year-over-year. New mortgage applications continue to come in weak amidst record low mortgage rates. Gold is knocking at the door of $1300. The dollar is weakening substantially and testing critical support. It's pretty clear folks: the next round of this debt crisis has begun.

The road to perdition begins and ends with the dollar. There is a direct correlation between the policies of Helicopter Ben and the value of the dollar, which was clearly expressed by the market's reaction to yesterday's FOMC announcement that more quantitative easing was ahead. I've said repeatedly that the Fed is in a bind, and the only way out is through dollar devaluation. Deflationists continue to argue this point, but you are starting to see they are dead wrong.

I've noted that gold can easily rise with the dollar. Some would say this is an example of having your cake and eating it too, but take a look at the price action in gold over the past year or so. Gold has risen both on dollar strength and dollar weakness. This is indicative of a flight to quality that is typical in a debt crisis. There is some major accumulation going on in the smart money crowd, and shorts better get out of the way.

The dollar has broken right through 80 on the dollar index this morning. This is a bearish signal. Eventually you will see substantial inflation from continued downward pressure on the dollar. Gold already has one rocket booster stemming from the collapse of public confidence; it will receive another when inflation arrives in earnest.

I continue to advise people to flee from the bond market. The early stages of a debt crisis are usually marked by a flight into "quality" government debt. It takes awhile, but market participants eventually say to themselves: "Geez, we're in a debt crisis- why the heck am I buying government debt?" They then head for the exits in unison and start moving their capital into gold in a big way. This process is well underway.

I know a lot has been made about the record highs in gold, but this is just the beginning of a major flight to safety. This is the monster move I've been preparing you for. I told you gold bubble experts were on the brink of extinction, and I was right. Where are they now? They are conspicuously silent, as they usually are when a major push in gold occurs.

It should be painfully obvious by now who is right and who is wrong. That many continue to argue with me even though they have made negative returns over the past couple of years is music to my ears. I love it. I will be dumping my gold on them when their emotions take over and they buy gold at any price. As a contrarian, I will know the worst is likely over for our country and I will be buying assets left and right. This is something to look for in the years ahead, but not yet. Timing is everything. For now, buy the dips, sell the rips, and take a vacation. You will thank me later.