Is The US Currently In Deflation?

Moses Kim from Expected Returns discusses the current inflation taking place in areas of the economy like medicine and college tuition that run counter to the questionable deflation numbers indicated by the government's consumer price index report. He suggests that that the Fed is most concerned about deflation in real estate, because of its potential to result in recession. See the following post from Expected Returns.

I initially planned to address the concerns about deflation in a brief post, but the subject is so complex that I'm afraid I will have to address it in 2 parts. Part 1 will lay out where we currently stand, while part 2 lays out my inflationary argument for the future.

First of all, what is deflation? Is it the contraction of money supply and credit, or is it the general decline of prices? (You know you are in the middle of a controversial debate when people can't even agree on basic definitions). I think we can all agree that economics is useful only to the extent that it explains the real world. Is my standard of living going down? Is food becoming more expensive? Is the government robbing my future by debasing our currency? That being said, I think the best definition for the sake of argument is that deflation is the decline in general price levels.

There are a growing number of investors who are expecting a deflationary collapse in America. Put another way, that believe the dollar will rise in value. I will devote Part 2 of this series to why this is utterly insane. But basically I believe it is impossible to have a long term deflationary trend in a pure fiat system as long as the government is determined to prevent it. Absolutely, positively, 100% impossible.

Let me lay out an undeniable fact for both inflationists and deflationists: We are currently experiencing both inflation and deflation. Home prices and bond yields are falling, but inflation expectations remain elevated. Many other costs are rising as well, with the biggest increases coming in medicine and higher education.

Medical costs are one of those things you can't avoid. Anyone who has had a serious illness understands how onerous medical costs can be.

The standard defense against rising medical costs is that medical care has improved. Strange, but you never hear these kind of arguments for computers, cell phones, or anything else that is in a steady trajectory of improvement. The fact remains that medical costs have risen in this so-called deflationary environment. 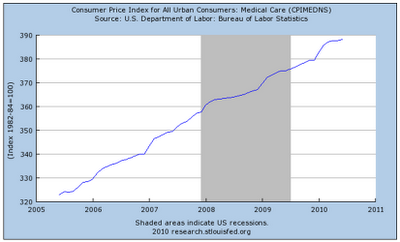 I believe higher education is the second biggest bubble I've seen in my life, trailing only U.S. government bonds. Tuition costs have risen to the point where the long-term value of a liberal arts education is very dubious. There is only so long this bubble can last. When people talk about deflation, they certainly aren't talking about tuition costs. 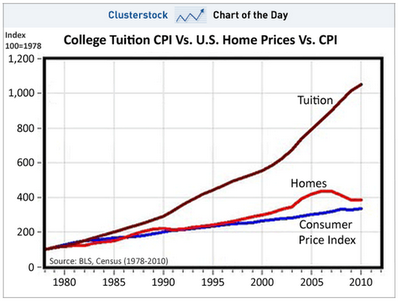 Many deflationists have a healthy dose of skepticism towards the government. They know the Fed is a private corporation; they understand the statistical joke that is the unemployment rate; and they understand that Social Security is a giant Ponzi scheme. The truly ironic thing is that these same people then turn around and accept the government's CPI figures as gospel. They'll point to a 0.1% decline in the CPI (according to the government) and scream that a deflationary collapse is upon us. Am I the only one who sees the humor in this? Anyone with some knowledge about economic statistics knows that CPI is incredibly flawed.

Anyway, does this look like a deflationary collapse to anyone? 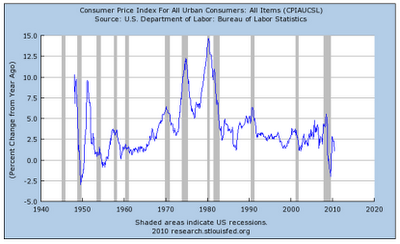 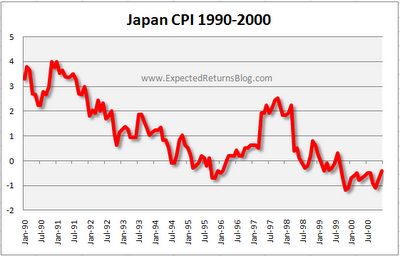 So why all the hoopla about deflation? Well I'll tell you why Helicopter Ben is scared of deflation; it's because of real estate. Do you think Bernanke cares if gas prices go down? What about food prices? Consumer electronics? No, everything hinges on real estate.

I can virtually guarantee a 10% drop in real estate will result in a deep recession. With the ongoing contraction in bank loans, this appears to be a near certainty. For example, banks have only recently imposed standards by which future cash income from a property is not included in present income. This directly contracts the borrowing capabilities of consumers. There are so many factors that are weighing down on housing that explaining it all warrants a post in itself. Without going into specifics for now, let me just say that I am almost positive that home prices nationally will decline again.

The trends present today will determine the trends of the future. Deflation, however tame, leads to inflation.