Tim Iacono points out that although the new home sales increased in June, it follows record lows and is still the second worst since 1963. When the numbers are put into context they indicate a very troubled market for new homes. See the following post from The Mess That Greenspan Made.

It appears as though the U.S. housing market has finally turned the corner as the Census Bureau reported(.pdf) a short while ago that new home sales surged 24 percent in June, the biggest monthly increase in almost six decades of record keeping. 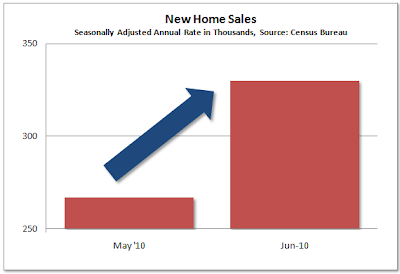 This stunning increase has caused housing bears across the land to “throw in the towel”, retracting recent predictions of a double-dip decline for home prices, and the mainstream financial media is overflowing with glowing headlines about the resurgence of the nation’s housing market as shown below. 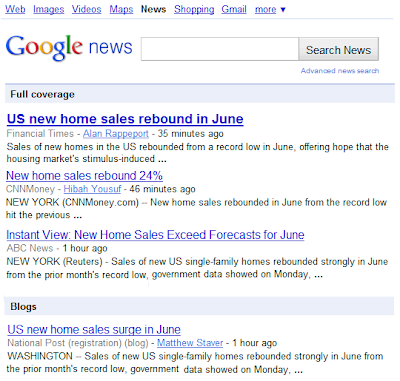 
To their credit, all of these reports note right up front that the “surge” is simply the not-too-surprising move upward from what can only be described as a virtual collapse in home sales during May, just after the homebuyer tax credit expired. In fact, all but one of the above reports also notes the downwardly revised April-to-May home sales plunge of some 37 percent, even worse than the 32 percent nose-dive previously reported.

But, that doesn’t excuse the headlines…

There’s no reason to provide a title that does not include the words “from record lows” and not doing so is really just irresponsible and, kind of silly.

The plot of new home sales normally seen here looks like this, the most recent activity put into its proper historical context, what is clearly a very troubled market for new homes: 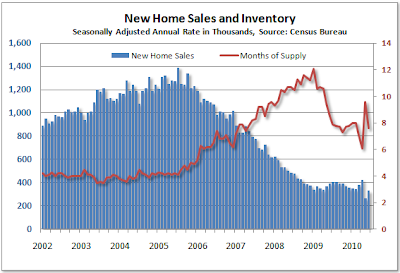