The Wall Street Journal points out anecdotal evidence of people who are taking advantage of low interest rates and low home prices to upgrade to a larger house or better neighborhood. Some financial advisors are also changing their tune and encouraging individuals to pay down their mortgage faster rather than use extra cash to invest in the stock market. See the following post from The Mess That Greenspan Made.

While I sometimes lament the troubles we’re having i 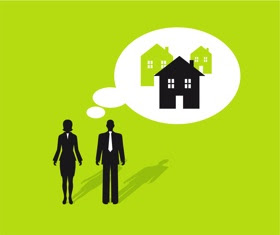 n getting our short sale offer moving toward a signed sales agreement, it’s easy to lose sight of the fact that the housing market is dramatically different than it was just a few years ago for long-time homeowners who may have been non-participants in the housing bubble back around 2005 or 2006.

Record-low mortgage rates and a new slump in home prices are presenting unusual opportunities in the housing market these days—even for so-called underwater borrowers.

Some intrepid homeowners are intentionally taking a loss on their current house—and writing a big check to retire their old mortgage—in order to buy twice the home for not much more money. Others, eschewing conventional personal-finance advice, are even opting for “cash-in” refinancings, paying thousands of dollars out of pocket to settle old loans—and then taking out new mortgages with lower payments, shorter durations or both.

Katie Everett, a real-estate broker in Denver, says none of her clients kicked in cash when selling their homes last year. This year, “about half are willing to bring money to closing, anywhere from $5,000 to $45,000,” she says.

Are these people crazy to be tying up even more of their cash in their homes, in effect doubling down on what has been a losing bet thus far?

No. Apparently the correct answer is no – they’re not crazy.

At least according to some economists.

Yet economists say trading up to new homes or refinancing existing ones can be smart—even if it means plunking down more cash to get out of old mortgages. People living in less-desirable neighborhoods might be able to find better homes in tonier ones that offer better appreciation potential. And with mortgage rates so low, such buyers can keep their monthly payments manageable, even though the new homes are more expensive.

“If you are trading up, what better time than when interest rates are at record lows and the cost of the trade-up is much less than it used to be?” says Christopher J. Mayer, a Columbia Business School economist.

Why do these people who gave such bad advice about five years ago still get called on by reporters to give even more advice? Search on “Mayer” here or here to see what Chris was thinking back in 2005 and 2006 – something about “Superstar Cities” where prices have fallen up to 40 percent since that wisdom was offered up.

In the past, financial planners typically recommended that homeowners devote as little cash to real estate as possible, and to invest it in the financial markets instead. But with stocks essentially where they were 11 years ago and market volatility seemingly on the rise, people are rethinking that wisdom. Devoting extra cash to repay a mortgage early is among the safest ways to produce an investment return.

“At this point,” says Jay Brinkmann, chief economist of the Mortgage Bankers Association in Washington, “if they don’t have anything else that is bringing a tremendous return, then they are buying themselves an annuity by paying their house off sooner than they needed to.”

During the fourth quarter of 2009, 33% of refinancings were of the cash-in variety, the highest percentage since Freddie Mac began tracking the characteristics of refinance transactions in 1985. Figures for the second quarter are due next week.

“Historically high percentages of borrowers are paying down their principal when they refinance their mortgages,” says Brad German, a Freddie Mac spokesman.

Man, that’s gonna kill an economy like ours that is largely based on asset prices forever rising faster than debt.

I guess people are starting to catch on – aspiring to live a debt free and more stress free life.

There’s a bit more in this report including a few examples of growing families trading up to a bigger house that seem to make good sense – just be sure to sell the old one before you commit to the new one!