Government Would Have Little Wiggle Room In A Double Dip Recession

With government deficits at unprecedented levels and Federal Reserve rates at record lows, there is limited wiggle room left for the US government should the US enter a double dip recession. Peter Morici argues that President Obama's ideas run counter to what needs to be done to prevent the US economy from entering into an extended and prolonged depression. See the following post from The Street. 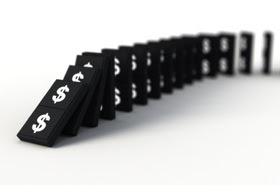 Conditions are emerging that could cause that to happen again, and without a radical change in policy, the nation is at risk of a terrible calamity.

The economy has many natural resuscitative qualities that usually return it to growth after it falters. During downturns, businesses run down inventories, and after a time, those must be restored. Efforts to slash costs go too far, and businesses begin investing again in critical equipment and software and start taking on some new hires.

Inventory rebuild, capital spending and some new jobs can jumpstart growth. This pattern emerged from July 2009 through March or April of this year.

If the economy goes down a second time, its resuscitative qualities will have been spent since government deficits can't be increased much, and the Federal Reserve can't further cut interest rates.

If the economy goes down a second time -- for example, GDP declines significantly two quarters in a row -- then it likely goes down for good. Unemployment would rise into the teens, and the economy would sink into a depression -- a deep and painful slump from which it cannot soon recover.

President Obama's policies are not helping.

More than $1 trillion in stimulus was squandered, creating few jobs, and the president's spending commitments are not proving temporary. Instead, federal finances are burdened by indefinite annual deficits of more than $ trillion -- much worse than when George Bush left office.

Obama's health care reforms are long on mandated benefits and short on cost controls. This combination is raising insurance premiums for businesses and individuals, forcing state governments to increase taxes or trim other programs, and discouraging businesses from hiring.

Financial reforms moving through Congress will impose costly new regulations that raise the cost of credit, create few meaningful consumer protections that are not already being implemented by the Federal Reserve, and leave the biggest banks largely free to continue speculative activities, controlling an even larger share of the nation's deposits than before.

Big banks remain too big to fail and are becoming more dangerous.

Smaller banks are cash starved and burdened by assets made toxic by the crash such as mortgages on shopping malls that have too few customers.

Businesses need customers and capital to grow the economy and create jobs. The trade deficit -- in particular, oil imports and the trade imbalance with China -- cuts huge holes in the demand for U.S. goods and services. Without meaningfully addressing petroleum use and China, other efforts to create jobs are futile.

Detroit can build many more attractive and fuel-efficient vehicles now, but for union contracts and cumbersome regulations. A national policy to replace the existing fleet would reduce imports and create many jobs.

Obama should counter Chinese protectionism and abuse of free trade with a tax on dollar-yuan conversions that will raise the prices of Chinese imports to their true cost to the U.S. economy.

A Resolution Trust, along the lines of the one during the era of the savings and loan crisis, could relieve regional banks of troubled loans, earn a profit for taxpayers, and give small- and medium-sized businesses adequate bank credit again.

Much of this runs counter to President Obama's progressive principals but hard realities, not utopian dreams, must dictate the decisions of a leader or his nation will fail.

Conditions are emerging that could cause that to happen again, and without a radical change in policy, the nation is at risk of a terrible calamity.
================
Rental Cars Sale
Williamsjohn333