The Debate Rages On Over Continued Deficit Spending

While economist Paul Krugman argues that more deficit spending is needed to spur economic growth, an opposing view is that because spending hasn't worked it should be stopped. As the debate rages on, there is also the possibility that there is a fundamental flaw in the system that is preventing the stimulus from generating faster growth. See the following post from The Mess That Greenspan Made.

One of the more luci 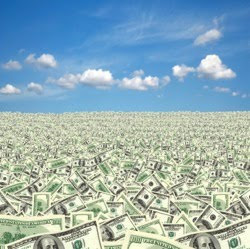 d and succinct retorts to the uber-Keynesian mantra expressed by the likes of New York Times columnist Paul Krugman who argue for more deficit spending to heal the economy (and if that doesn’t work, repeat, repeat, repeat, and repeat again until it does) comes from Richard Russell, long-time author of The Dow Theory Letters, in a recent commentary that appeared over at the Pragmatic Capitalism blog.

I’ve insisted all along that the US should have allowed the primary bear forces to fully express themselves, as they inevitably will do anyway. But in its arrogance and ignorance, the administration decided that they could halt or sidestep a recession by printing us out of trouble. It’s been a terrible and expensive mistake. Finally, with debts now pushing above 90% of GDP, the American people have shouted “Stop, it’s not working, we can’t find jobs, and you people in Washington are pushing us and our children into a state of bankruptcy. If you don’t know what you’re doing — stop it!”

Of course, uber-Keynesians would argue the real dilemma is that the original stimulus was just too small. The possibility that our problem is not simply one of falling aggregate demand, but is more a matter of fundamental flaws in the system as currently constructed that more trillions in band-aids have no hope of fixing doesn’t really enter into the picture.

The rest of the commentary is well worth a look as it puts our current predicament into its proper historical context. Also see Richard Russell: Major Crash Likely If… from back in mid-May, a market call that seems to be aging well – it was written when the Dow was about a thousand points higher.