It appears that more homeowners are taking advantage of the length of time it takes for banks to repossess a home. The "free rent" can last an average of 438 days before an eviction according to one study, while banks seem content with keeping the losses off their books. See the following post from The Mess That Greenspan Made. 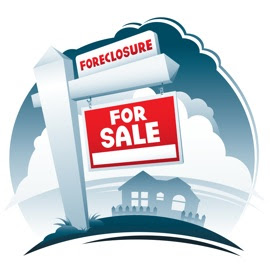 Times by David Strietfeld shows just how quickly cultural norms are being cast aside in favor of doing what makes sense, that is, given the situation that many “homeowners” now find themselves in.

For Alex Pemberton and Susan Reboyras, foreclosure is becoming a way of life — something they did not want but are in no hurry to get out of.

Foreclosure has allowed them to stabilize the family business. Go to Outback occasionally for a steak. Take their gas-guzzling airboat out for the weekend. Visit the Hard Rock Casino.

“Instead of the house dragging us down, it’s become a life raft,” said Mr. Pemberton, who stopped paying the mortgage on their house here last summer. “It’s really been a blessing.”

A growing number of the people whose homes are in foreclosure are refusing to slink away in shame. They are fashioning a sort of homemade mortgage modification, one that brings their payments all the way down to zero. They use the money they save to get back on their feet or just get by.

This type of modification does not beg for a lender’s permission but is delivered as an ultimatum: Force me out if you can. Any moral qualms are overshadowed by a conviction that the banks created the crisis by snookering homeowners with loans that got them in over their heads.

After that 60 Minutes segment a couple weeks ago, the appearance of more and more stories like this one are likely to make the situation snowball and, when you think about it, everyone’s probably just fine with that for the time being.

In this election year, the last thing that elected officials want to see gracing the front pages of newspapers is unemployed Americans being kicked out of their homes and, as long as the banks don’t take these properties back and try to unload them, they won’t have to realize the loss, their books continuing to reflect a value that has little semblance to reality.

This lets families get back on their feet again while getting used to the idea that they’re going to lose their house, making the whole process a bit easier when they finally get the boot. Sadly, the entire nation seems to be playing one giant game of “kick the can down the road”, what will someday be called the beginning of the lost decade.

Just like when they used to joke back in 2005 that, “if you can fog a mirror you can get a home loan”, today people are saying, “just stop paying your mortgage – you’ll get to live in your house free for at least a year”. In both cases, people weren’t really joking, though, if you look at this through any 20th century lens, it sounds like madness.

The average borrower in foreclosure has been delinquent for 438 days before actually being evicted, up from 251 days in January 2008, according to LPS Applied Analytics.

While there are no firm figures on how many households are following the Pemberton-Reboyras path of passive resistance, real estate agents and other experts say the number of overextended borrowers taking the “free rent” approach is on the rise. 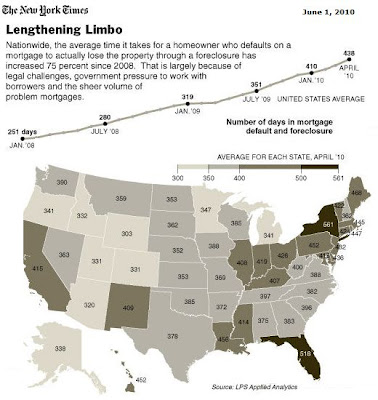 There is no question, though, that for some borrowers in default, foreclosure is only a theoretical threat for a long time.

More than 650,000 households had not paid in 18 months, LPS calculated earlier this year. With 19 percent of those homes, the lender had not even begun to take action to repossess the property — double the rate of a year earlier.

In some states, including California and Texas, lenders can pursue foreclosures outside of the courts. With the lender in control, the pace can be brisk. But in Florida, New York and 19 other states, judicial foreclosure is the rule, which slows the process substantially.

Email ThisBlogThis!Share to TwitterShare to FacebookShare to Pinterest
Labels: foreclosures