It wasn't easy for the Financial Crisis Inquiry Commission ( 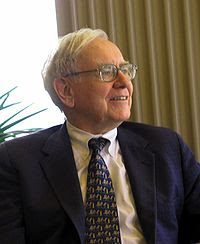 FCIC) to get Berkshire Hathaway(BRK.B) CEO Warren Buffett to appear before it.

Earlier this week, the Financial Crisis Inquiry Commission released its lineup for next Wednesday's hearing on the credit rating agencies and credit derivatives, and the name of Warren Buffett -- alongside a slate of Moody's Investor Service(MCO) officials -- comprised the Wednesday lineup.

On Friday morning, long-time Buffett "pal" and Fortune writer Carol Loomis -- who edits the Berkshire Hathaway annual letter, serves as moderator during the Berkshire Hathaway annual meeting Q&A, and owns shares of Berkshire Hathaway -- wrote that Buffett refused requests to provide voluntary testimony to the FCIC. It turns out that while Buffett loves showing up on CNBC whenever it suits his purposes, he just couldn't find the time to testify before the federal government as it tries to avoid future financial crises of the type which sank the country and has cost millions of American their homes and incomes.

Requests from the general counsel of the FCIC, Gary Cohen, were responded to by a Buffett assistant, who said Buffett appreciated the invitation and was flattered by it, but he "had a full plate with Berkshire and just can't do it."

Apparently, Buffett thought it was an invitation to tea.

It wasn't, and it wasn't just the FCIC general counsel who was calling, but the FCIC executive director Wendy Edelberg who sent letters to Buffett asking him to testify, Fortune reports on Friday.

Finally, the FCIC was forced to tell Buffett he would receive a subpoena if he did not volunteer testimony, and that's what transpired, with Buffett telling the FCIC to "bring on" the subpoena if that is what it would take to get him to testify.

The Fortune report provides some telling details of the legal process leading up to what seems like just another among countless reams of testimony before the FCIC, however, the Fortune report also lets Warren Buffett off a little easy in his reasoning for not offering voluntary testimony.

The FCIC letters to Buffett asking for testimony said the hearing would cover "the use and misuse of derivatives instruments, regulatory shortcomings, too big to fail, rating agencies and the shadow banking system."

Fortune's Loomis writes that "Buffett had by that time watched some of the Commission's hearings and knew that the witnesses had mainly been people implicated in the crisis -- bankers, notably -- or charged with regulating it out of existence. Knowing that he was in neither camp and doubtful that his testimony would indeed be of 'great value,' he decided to say no to this surprising invitation."

This can be read as the classic Buffett "have my cake and eat it too." Much has been made of the fact that Buffett recently lobbied for an exemption from pending derivatives reform legislation for his company, while he and Berkshire Hathaway chief operating officer Charlie Munger spend a good deal of time blaming derivatives for destroying good old American capitalism, too.

Yet the real issue with the Buffett response to the FCIC -- that his testimony would offer little as the focus was clearly on the banks -- is that it rings hollow, as Buffett and several Berkshire Hathaway executives found plenty of time in recent weeks to flood the airwaves with defenses of Goldman Sachs(GS) and its series of Abacus subprime investments.

Buffet, in fact, said that Berkshire Hathaway shareholders should bring any and all questions about Goldman Sachs to the Berkshire annual meeting -- which would be moderated by Fortune's Loomis -- yet he could not find time to answer the federal government's questions.

Several Berkshire Hathaway board members and Berkshire Hathaway COO Charlie Munger also provided public defenses of Goldman Sachs in the days after the SEC fraud charges were announced --which were borderline tortured, when not the kind of saccharine endorsements meant for Hallmark writers. Buffett received high marks for his analysis of why the Goldman Sachs investments were not fraudulent, yet by taking up the issue he placed himself inside the storm over credit derivatives.

Of course, Buffett can argue that shareholders of his company demanded a response on Goldman Sachs and he would have never provided one if they did not ask. Buffett should put his shareholders first, but shouldn't the federal government at least be on equal footing?

Buffett could have simply told the press and Berkshire Hathaway shareholders that it wasn't proper for him to comment on the Goldman Sachs case, and that he wasn't a legal expert and he was "doubtful his testimony would be of great value." Yet Buffett spoke at length about how great Goldman Sachs is as a company and that he wished Goldman CEO Lloyd Blankfein was his brother.

It's not insignificant, either, that during the same time period when Buffett was defending Goldman Sachs and saying that the investors who lost $1 billion in the subprime series of investments known as Abacus simply didn't do their homework, rating agencies including Standard & Poor's were testifying before Congress and saying that the banks had put pressure on them to provide positive ratings to credit investments.

In the blame game, credit rating agencies shouldn't be excused for bowing to pressure from Wall Street. However, an S&P official was specifically asked in a congressional hearing what he thought of the fact that John Paulson of Paulson & Co. was working with Goldman Sachs to select the subprime securities in the Abacus series of investments.

Buffett can say all the wants that his testimony is of "doubtful" value, yet he agreed to make a major defense of Goldman Sachs, which he didn't have to make, and one that gets to the heart of all of these issues related not just to the banks, but the rating agencies, and instruments like Abacus.

There is also the fact that Buffett is one of the largest shareholders in Moody's, but has been an aggressive seller of Moody's shares for over a year. This may amount to no more than an interesting side note, though, rather than a big part of the heart of the FCIC matter, with which Buffett claims he really isn't in a position to provide useful testimony.

Fortune writer Loomis concludes her valuable piece on the background to Buffett's testimony by saying that FCIC officials came to Omaha for a pre-interview with Buffett and brought books for him to autograph, and that Buffett told her that he enjoyed the talk. Of course, that talk wasn't broadcast on CNBC from a dining car inside a Burlington Northern railroad as Buffett saw fit to do around the time of the Berkshire Hathaway annual meeting.

Fortune's Loomis concludes the piece with the words, "Provided that the commission members ask intelligent questions and don't try to grandstand, this writer predicts that Buffett will enjoy the hearings as well."

Let's hope that in the goal of avoiding future financial crises, the goal of the FCIC questioning of Buffett is not to make sure that Warren Buffett enjoys his compulsory performance.

This post has been republished from The Street, an investment news and analysis site.