Many States Running Out Of Unemployment Funds

25 states have already run out of money for unemployment benefits and many more states are expected to follow in the next couple of years. With a growing number of Americans staying unemployed for more than 26 weeks, the costs to the government will continue to rise. See the following article from Expected Returns.

The ongoing recession has resulted in elevated levels of unemployment, and a dramatic increase in the extension of unemployment benefits- which is proving to be a drain on the budgets of states. There will eventually come a point where states can no longer function without draconian cuts to services. From the Washington Post, Unemployment funds going 'absolutely broke':

The recession's jobless toll is draining unemployment-compensation funds so fast that according to federal projections, 40 state programs will go broke within two years and need $90 billion in loans to keep issuing the benefit checks.

The shortfalls are putting pressure on governments to either raise taxes or shrink the aid payments.

Currently, 25 states have run out of unemployment money and have borrowed $24 billion from the federal government to cover the gaps. By 2011, according to Department of Labor estimates, 40 state funds will have been emptied by the jobless tsunami.

Undoubtedly these projections are overly optimistic. Lets just take California as an example. In the 5 months of this budget year, California is already running $1 billion dollars behind already dire budget projections. Furthermore, tax revenues in November were 12% below estimates. Our economy simply will not recover unless California recovers as well.

Below I have included a chart showing the Employment to Population ratio over the past 10 years. This chart helps to explain why economic conditions are deteriorating at the same time that the unemployment rate is falling. The Employment to Population ratio captures unemployed persons that may not be calculated in the "official" unemployment rate for whatever reason, and therefore, gives a more objective and fuller view of the unemployment picture. The chart below makes it plain that people are relying on the local and federal government to hand them checks. 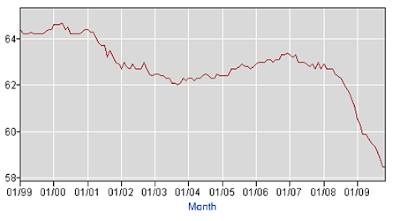 Unemployment benefits are funded by the payroll tax on employers that is collected at a rate that is supposed to keep the funds solvent. Firms that fire lots of people are supposed to pay higher rates. The federal government pays for administrative costs, and in a recession, it pays for the extension of unemployment benefits beyond 26 weeks. But over the years, the drive to minimize state taxes on employers has reduced the funds to unsustainable levels. 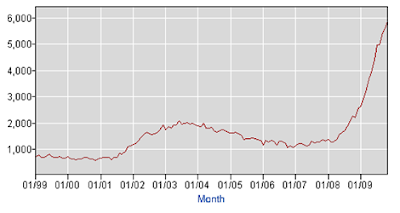 States are following our federal government on the road to bankruptcy. Exactly how long can the government continue to hand out checks to people when they facing solvency issues themself? We will soon find out.