The recent price correction in gold has created some to warn of a gold bubble that is ready to collapse. However a look at historical data makes the latest gold run look rather mild in comparison. Moses Kim makes a case for why the potential of gold greatly outweighs the risks. See the following post from Expected Returns for more on this.

As expected, gold bears led by the likes of Bob Prechter are calling for the imminent collapse of gold. Lets forget for a moment that the deflationists have been wrong about gold for the better part of this decade, and try to assess whether gold is indeed overstretched at these levels.

Below is a chart courtesy of golddrivers.com that shows the inflation-adjusted price of gold as per the CPI figures from shadowstats.com. John Williams at shadowstats.com calculates CPI figures using the old methodology, which is before the government started using statistical gimmicks like hedonics and substitution. As you can see, relative to the price of real goods, gold is still historically cheap. This looks nothing like a bubble to me. 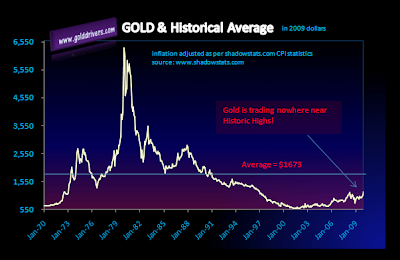 Below is a 3-year chart of gold, which will give you an idea of the volatility this market often brings. While this correction may seem abrupt and brutal in the short run, it is mere noise in the context of this bull market. When all is said and done, this correction will look mighty trivial. I can tell you this much: many people will be kicking themselves for not buying into this correction and expecting a "collapse" in gold prices. 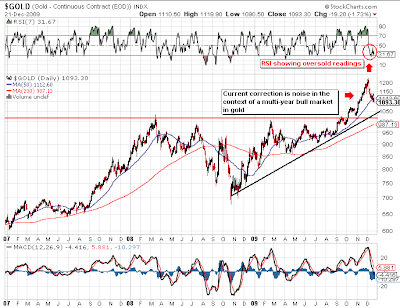 Anyone who looks at the chart above and tells me this looks like a blow-off top should not be investing lest they lose all their money. Since when do bubbles not bring record high prices in the underlying equities? If you ask me, this is the strangest "bubble" I've ever seen. Never before have I seen a bubble without public participation. Never before have I seen a bubble when the mainstream was screaming from the rooftops that it was a bubble. Believe me, those who are accumulating physical gold and gold shares love it every time someone publicly proclaims gold to be a bubble.

Gold is going to $2,000 an ounce as long as we have clowns like Helicopter Ben Bernanke dictating monetary policy. There is so much disbelief in the gold story only because people do not know their history. There have always been times in history, all the way back to when fiat money was first created in China, when people were supremely confident in the merits of paper money. Every single time that misguided confidence was shattered in a heartbeat. If you think this time will be different and that paper money will retain its value, then you are playing a dangerous game based on a premise that goes against all of human history.

Let me put it this way for rational-minded folks. My argument is structured along the lines of Pascal's wager and has nothing to do with supply, demand, or monetary policy. Basically, the downside risks to owning some gold in the event that fiat currencies don't collapse are far outweighed by the downside risks of owning no gold in the case of a fiat currency collapse. Why would any rational-minded individual accept such assymetric risks with what amounts to their livelihood? I don't know about you, but I'm proactively protecting myself from the foolishness of government officials who have thrown all prudence out the window and are leading us into the abyss.