Consumer Credit Has Fallen Off A Cliff

Consumers tend to spend significantly more when they pay with credit cards rather than cash, so it is bad news when consumer credit outstanding falls off a cliff. Black Friday reports suggest consumers are switching more to cash payments while Baby Boomers are shifting behavior and saving more. See the following post from Expected Returns.

Since the 1980's, credit has played an outsized role in funding our economic growth, and of course, the growth of banks' balance sheets. Prescient voices have been warning for years that the economic model of debt-financed consumption was unsustainable. Unfortunately, they have proven to be correct.

Here's a chart of consumer credit outstanding, which is expected to fall for the 9th straight month when reports come out later this week. This would mark the longest stretch of declining consumer credit in the post-WWII era. Judging from the precipitous decline in consumer credit, I think it's safe to say that this recession is of a totally different breed. 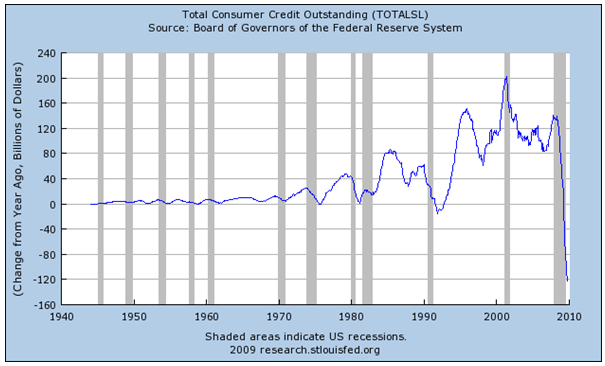 I find it hard to believe we have pulled ourselves out of this recession without an increase in consumer credit. The effects of contracting consumer credit are being reflected in preliminary Black Friday reports that suggest consumers used less credit to fund purchases. Even with heavily discounted items and unprecedented marketing efforts, retailers missed November sales estimates. Even if we sqeak out better year-over-year retail sales figures, keep in mind that last year's retail sales declined at the fastest pace in at least 38 years. In other words, nothing to celebrate.

Looking in the years ahead, the monumental shift of Baby Boomers from consumers to savers, which will be accentuated by the drastic decline in net worth this recession has brought about, will further strain aggregate consumption in the U.S. Like it or not, all the evidence points to prolonged weakness in consumer spending, and a protracted recovery that will be measured in years.