Bank of Korea Is Bearish On Gold

An official from the Bank of Korea calls gold "an illusion" and says points to the lack of nations buying gold. Moses Kim explains why he disagrees with the statement that gold "offers no value". See the following post from Expected Returns.

You have to love investor sentiment. Sentiment in gold has gone from excessively bullish to excessively bearish all in one week. I have started slowly buying back into this correction for this very reason. From Bloomberg, Bank of Korea sees 'Illusion' in Gold, no cash return:

The Bank of Korea, diversifying foreign-exchange reserves away from a falling dollar, said additional gold holdings aren’t attractive as most other central banks aren’t buying and the metal offers no cash returns.

“There’s an illusion in gold,” Lee Eung Baek, head of the bank’s reserve-management department, said in an interview. “We follow the big trend. Gold isn’t the trend. Out of more than 200 nations, how many countries have bought bullion?”

Gold isn't the big trend? Maybe I'm going mad, but I think the average kindergarten student can recognize the trend in gold, no? 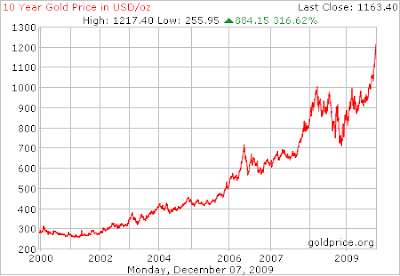 I have a couple of questions in response to Mr. Lee's second point. How many of the 200 nations, with their teams of expert financial advisers, saw the biggest worldwide financial collapse in 70 years coming and prepared adequately for the storm? How many central banks were buying gold at the bottom instead of selling like the Bank of England? And now I'm supposed to take investment advice from them? No thank you- I'm better served doing the exact opposite.

It's interesting you're seeing this stance from the Bank of Korea when it was gold that helped get them out of the IMF crisis. Has this fact been lost on the Bank of Korea? I doubt it. I wouldn't be surprised to see Korea's gold holdings rise in the next couple of years, perhaps quite substantially.

“Like other central banks, we have been increasing the types of currencies consisting of the reserves outside the dollar,” Lee said yesterday by phone, without identifying the currencies. Gold “offers little value,” with “no cash returns,” he said.

Please refer back to the chart above. I believe the cash returns for gold investors have been quite high. I would argue that the Bank of Korea's holdings of U.S. Treasuries are in fact the asset that has offered "no cash returns". In fact, considering the dramatic decline in the dollar over the past decade, the Bank of Korea has been getting "negative returns".

While gold was going parabolic, I noted that negative investor sentiment was exactly what I wanted to see, and exactly what we needed to resume the uptrend in gold. We probably haven't reached a climax in bearish sentiment just yet, but we're getting there.

This post was republished from Moses Kim's blog, Expected Returns.
Posted by: NuWire Investor @ 5:48 AM