The Overlooked Benefit Of Unemployment Benefits

One in every seven Americans relied on food stamps in September while almost 6 million people were unable to find work. Mark Thoma writes that an overlooked benefit of unemployment benefits is that it keeps people connected to the job market rather than leaving the work force. See the following post from Economist's View. 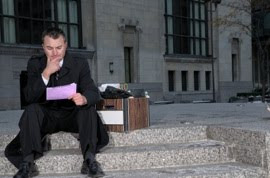 Nearly 6 million Americans looked for work but weren’t able to find employment at all last year,... an increase of 2.7 million from a year earlier. ...

That makes it hard to swallow stories where the high unemployment rate is caused by an unwillingness to work due to government programs such as unemployment compensation.

More people tapped food stamps to pay for groceries in September as the recession and lackluster recovery have prompted more Americans to turn to government safety net programs to make ends meet.

Some 42.9 million people collected food stamps last month, up 1.2% from the prior month and 16.2% higher than the same time a year ago...

Nationwide 14% of the population relied on food stamps as of September...

That means the presently about one out of every seven people relies on food stamps.

Also, more from the first link on the 6 million people who have been searching unsuccessfully for work (and may be relying upon food stamps) -- a benefit of unemployment compensation that isn't always recognized is its ability to keep people connected to the labor market. Without it, more people would leave the labor force permanently during downturns, and that can be quite costly:

Turning to disability benefits is a common path for those who become disheartened by the job search. Once they start receiving those benefits, they’re likely to stay on the program for the rest of their lives — which comes with a hefty price tag. Extended unemployment benefits have been touted as a way to keep those who have been out of a job engaged in the labor market because unemployed individuals must continue applying for positions in order to receive their benefits. ...

Programs like extended unemployment benefits and job training for those who have been out of work the longest don’t tend to get a lot of political attention. That could be because those most affected by unemployment are not among those most likely to vote. ...

It's not just whether they vote, money matters in politics. Workers generally, and the unemployed in particular, cannot match the contributions to political campaigns that those who get more attention are able to make. Mechanisms such as unions that served to concentrate the power of individuals are no longer effective countervailing forces.

This post has been republished from Mark Thoma's blog, The Mess That Greenspan Made.
Posted by: Economist's View @ 5:52 AM