Employment growth stumbled in November with less than expected growth as the unemployment rate grew to 9.8 percent. Despite reports of strong retail hiring in preparation for holiday shopping, there were a reported 28,100 retail jobs lost in November. See the following post from The Mess That Greenspan Made.

The Labor Department reported that nonfarm payrolls rose by just 39,000 in November, far below expectations for an increase of 130,000, and the unemployment rate unexpectedly rose from 9.6 percent to 9.8 percent as discouraged workers rejoined the labor force. A broader measure of unemployment, including those who have given up looking for work and those accepting part-time positions instead of full-time, held steady at 17.0 percent. 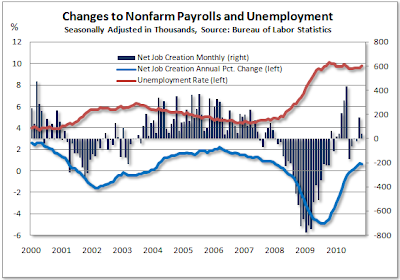 Private payroll gains – excluding all government agencies – were also disappointing, rising by just 50,000 when the consensus amongst analysts was for a gain of more than 150,000.

By category, it was the familiar story of gains for temporary workers (within the professional services category) and in the health care industry, the former adding 39,000 positions last month and the latter seeing an increase of 23,100.

In contrast to recent national and regional reports for manufacturing where employment has been expanding for months, the Labor Department reported that manufacturing payrolls declined by 13,000 in November after falling by 11,000 in October. 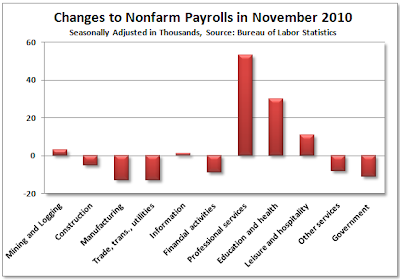 Retail trade lost 28,100 jobs last month, contributing to the overall decline of 13,000 for trade, transportation, and utilities payrolls, at odds with recent reports of robust hiring for the holiday shopping season. Local government payrolls were slashed by 14,000 while 3,000 positions were added at the state and federal government levels.