How To Boost The Economy Without Growing The Deficit

Concerns of a growing deficit means limited options for future government stimulus plans. One option to stimulate the economy without raising the deficit would be to increase taxes simultaneously with spending, but the unpopularity of any tax increase would make this option difficult. See the following post from Economist's View. 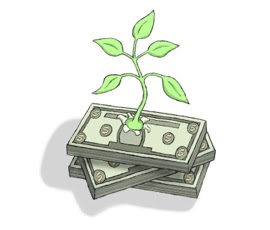 get multiplier can help us solve our problems:

Stimulus, Without More Debt, by Robert Shiller, Commentary, NY Times: The $858 billion tax package signed into law this month provides some stimulus for our ailing economy. With the unemployment rate at 9.8 percent, more will certainly be needed, yet further deficit spending may not be a politically viable option.Instead, we are likely to see a big fight over raising the national debt ceiling, and a push to reverse the stimulus we already have.

In that context, here’s some good news extracted from economic theory: We don’t need to go deeper into debt to stimulate the economy more..., a concept known as the “balanced-budget multiplier theorem” states that national income is raised, dollar for dollar, with any increase in government expenditure on goods and services that is matched by a tax increase.

The reasoning is very simple: On average, people’s pretax incomes rise because of the business directly generated by the new government expenditures. If the income increase is equal to the tax increase, people have the same disposable income before and after. So there is no reason for people, taken as a group, to change their economic behavior. But the national income has increased by the amount of government expenditure, and job opportunities have increased in proportion. ...

John Maynard Keynes ... liked to emphasize that the deficit-spending multiplier was greater than 1, because the income generated by deficit spending also induces second and third rounds of expenditure. ... In contrast, the balanced-budget multiplier theory says that there are no extra rounds of expenditure... — meaning that the multiplier is 1.0 — but sometimes that is enough. ... People have jobs again: end of story. What kind of jobs? Building highways and improving our schools are just two examples...

At present, however, political problems could make it hard to use the balanced-budget multiplier to reduce unemployment. People are bound to notice that the benefits of the plan go disproportionately to the minority who are unemployed, while most of the costs are borne by the majority who are working. ... Another problem is that pursuing balanced-budget stimulus requires raising taxes. And, as we all know, today’s voters are extremely sensitive to the very words “tax increase.”

But... It’s conceivable that an effective case will be made in the future for a new stimulus package, if more people come to understand that a few years of higher taxes and government expenditures could fix our weak economy and provide benefits like better highways and schools — without increasing the national debt.

This is a second best solution that combines a large negative shock with a large positive shock to produce, on net, a much smaller positive impact on the economy. It would be better to have the large positive shock, i.e. stimulus, now while the economy is struggling to recover, and save the negative shock for a time when the economy is overheated and a negative shock is the policy that is needed. However, since Congress has very little credibility, there is no guarantee that a positive shock now will be offset later through tax increases or spending reductions. In fact there's reason to believe that Congress will not be inclined to pay for the spending when it's time to do so -- raising taxes and cutting spending is unpopular even in the best of times. Thus, because Congress cannot be trusted to do the right thing in the future, we are stuck with suggestions such as above that compress the spending and the means to pay for it into a single time period. This overcomes the problem of future Congresses not abiding by promises that are made now. But it comes at the cost of much less effective stimulus measures either because we adopt balanced budget approaches such as suggested above, or because spending measures are less aggressive than needed due to fear that it will create budget problems down the road.