Peter Morici writes that the US GDP growth is being kept artificially low due to undervalued currencies that contribute to the trade deficit of the US with China and Germany. Morici suggests that if the US trade deficit were cut in half, unemployment would fall to 6 percent or less. See the following post from The Street.

On Tuesday, the Commerce Department announce 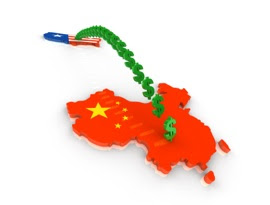 Growth is too slow, and unemployment is kept unacceptably high by surging imports, especially from China and Germany, which enjoy undervalued currencies.

U.S. unemployment will stay near 10% until governments in China and elsewhere end policies that purposely undervalue their currencies to boost exports, growth and employment by imposing slow growth and unemployment on the U.S. and other economies. Alternatively, Washington and others could take measures to offset Germany's and China's currency manipulation.

More than a year into the recovery, the economy should be expanding at about a 5% annual rate; however, growth is dragging along below 3% because of the surge in imports from countries whose governments engineer undervalued currencies.

U.S. imports and unemployment are kept high by a dollar that is overvalued against the currencies of big exporters. These currencies are kept cheap, not by private investment in the U.S. financed by foreign private savings, but by purposeful government intervention in currency markets designed to bolster domestic growth at the expense of the United States and other free traders.

The worst malefactors are China and Germany. China spends 35% of its export revenues buying U.S. dollars to keep its yuan, and this subsidizes its sales into the U.S. by a like amount. This unfair advantage far exceeds the benefits bestowed by its cheap labor.

Germany benefits from an undervalued euro for its economy by being grouped with Spain, Portugal, Ireland, Greece and perhaps Italy, whose fiscal woes pull down the euro.

Were Germany on an independent Deutsche Mark, its currency would trade much higher against the dollar than the euro, Germany's trade surpluses with the U.S. and its southern neighbors would be much smaller, and the fiscal woes of those southern countries would be much more manageable.

Overall, without currency realignments -- especially a stronger yuan and currency reform in Europe -- the U.S. economy cannot grow at the pace that will pull down unemployment, and the nations of southern Europe and Ireland will need perpetual bailouts or face default on sovereign debt.

This post by Peter Morici has been republished The Street, a site covering financial news, commentary, analysis, ratings, and business and investment content.
Posted by: NuWire Investor @ 5:56 AM