Alan Greenspan suggests that corporations are harvesting untapped cost-saving innovations from the previous boom to earn record profits. Without supporting the work force, the growth in corporate profits is not expected to continue. See the following post from The Street.

Even with the big rebound in corporate profits -- 28% 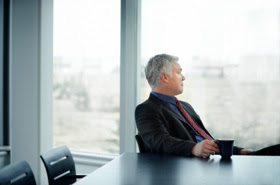 in the third quarter -- Commerce reported that spending by corporate America on compensation for employees in the past year has only risen by 7.6%.

Corporate insiders have been cashing out of their stocks this month through insider sales, too, at higher rate than at any other time in the previous few years.

One has to suspect something is rotten in the state of record corporate profits when the unemployed have corporate America's best pal and former Fed Chairman Alan Greenspan speaking about the irrational exuberance of recent profit generation. Greenspan said in an interview with Bloomberg this week, "When markets shut down, and capacity expansion comes to a halt, companies direct all of their capabilities toward harvesting untapped cost-saving innovations accumulated during the previous boom. We have been experiencing this harvesting for a year or so. You have to ask the question: Are we running out of backlog?"

Indeed, the overstuffed turkey has been bred by the miracle of modern food science to exist only to fatten up. It can't stand on its own two legs -- let alone see them -- for more than a year or two without ultimately giving out in a stress-induced heart attack. How long can corporate America keep stuffing itself without feeding the work force and expect this little colony's harvest to remain bountiful?

The 8.5 million jobs that companies axed during the recession may seem like a drop in the bucket compared to the roughly 50 million turkeys consumed on Thanksgiving across the U.S.

However, we're not gobbling up the deliciousness of the rebound in corporate profits. Thanks for nothing, we say, and we ask, Where's the give to balance out the take? When will corporate America risk some of the current bounty on the unemployed descendants of the Plymouth Rock experiment?

This post by Eric Rosenbaum has been republished from The Street, a site covering financial news, commentary, analysis, ratings, and business and investment content.
Posted by: NuWire Investor @ 5:48 AM