GDP And Consumer Spending Grow In The Third Quarter

Third quarter GDP growth was reported to be 2 percent, which matched expectations and relieved some fears of a double-dip recession. The stock market had a strong quarter with a 10 percent increase and consumer were spending at the fastest pace since 2006. See the following post from The Mess That Greenspan Made.

There were no surprises in today’s Commerce Department report showing the U.S. economy expanded at a rate of 2.0 percent in the third quarter – that’s exactly what markets expected. 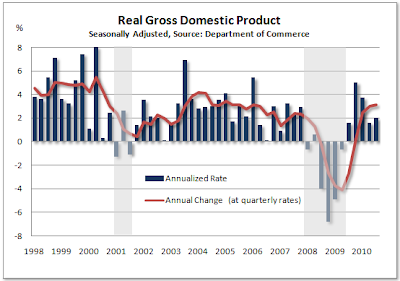 While two percent is a number that policymakers would much rather see from the inflation data – not the growth data – it looks quite a bit better than some of the more dismal projections over the summer, some of which approached zero percent growth or worse.

As shown below, the American consumer was again doing their part in the July-to-September period as real personal consumption expenditures grew at a 2.6 percent pace, contributing 1.8 percentage points to the overall gain as the other categories essentially canceled each other out. 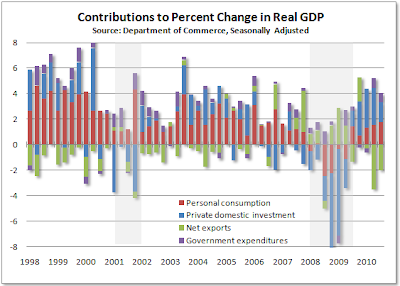 The rising stock market – up 10 percent or more during the quarter – and some stability in home prices are said to have played a major role in convincing Americans to spend at the fastest pace since late-2006 when the housing bubble was still mostly inflated.

Personal consumption is surely not being driven by a healthy labor market or rising consumer confidence, both of which remain at recession levels with few indications of any change coming anytime soon.

Weakness in either stock prices (possible) or home prices (likely) in the period ahead would probably change how consumers feel about continuing to keep their wallets open and not for the better.