A Defining Moment For Bernanke And The Fed

The upcoming meeting by the Fed is set to be a defining moment for Ben Bernanke as he decides whether to implement the quantitative easing that the Fed has been talking about since August. While the stimulus could boost a mediocre economy, there are also downsides like increasing inflation too much or causing a decrease in confidence in the Fed. See the following post from The Mess That Greenspan Made. 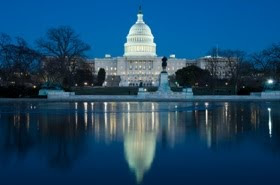 go to the polls tomorrow while the nation’s central bank begins a policy meeting, after which they are expected to announce plans to print up another few hundred billion dollars in order to give the economy a boost.

In the minds of a myopic Fed (one that still claims to be unable to see asset bubbles forming and one that still clings to the notion that monetary policy did not play an important role in the last asset bubble’s inflation and bursting) the case for further stimulus is abundantly clear – unemployment is too high and inflation is too low.

But, in the minds of many others, the perils of more more money printing are all too obvious, Neil Irwin of the Washington Post nicely summarizing the downside possibilities for Federal Reserve Chairman Ben Bernanke in this story today.

But should the Fed overshoot in its plan to pump hundreds of billions of dollars into the economy, it could produce the same kind of bubbles in the housing and stock markets that caused the slowdown. Or the efforts could fall short and fail to energize the economy, leaving a clear impression that the mighty Fed is out of bullets – thus adding even more anxiety to an already dire situation.

The meeting of Fed policymakers is set to be a defining moment of Ben S. Bernanke’s second term as chairman of the central bank. Although he helped win the war against the great financial panic of 2008 and 2009, he now risks losing the peace if he fails to end the protracted economic downturn that followed.

They’ve been talking about printing more money since August, during which time the Dow has gained 1,000 points and the price of gold has gone up by more than $200 an ounce.

Of course, everyone seems to want stocks to go up while only a few care about a sharply rising gold price, but, what may be of more concern to policymakers in Washington are prices for food and energy, both of which have been rising rapidly. Since early-August, the price of corn has risen 40 percent and soybeans are up almost half that amount while $80+ a barrel oil prices are pushing gasoline prices ever closer to the $3 a gallon mark.

That would be the worst case scenario for the Fed – to be wildly successful in pumping up prices, but failing miserably to do much for the labor market.

“The greatest risk for the Fed in taking this action is that it could extend the economy’s funk by giving a sense that either no one is in charge or that the people who are in charge can’t get it right,” said David Shulman, senior economist at the UCLA Anderson Forecast. “The whole psychology of that could leak back into the economy.”

The Fed is charged by Congress with a twin mandate of maintaining maximum employment and stable prices, and it is failing on both counts.

The economy isn’t in free fall. But as new data on gross domestic product affirmed Friday, the economy is mired in mediocre growth, too slow to bring down the unemployment rate. Inflation, meanwhile, is running about 1 percent, below the rate Fed officials view as optimal. When inflation is a little higher, it encourages consumers and businesses to spend money before it loses value.

The problem is, it could get a whole lot more unsatisfactory and the inflation doves on the Fed don’t seem to see that as a particular danger, still fearing the de-flation demon and continuing to have a strong preference for fighting its opposite – in-flation.

Somehow, it seems likely that the Bernanke Fed will get that opportunity someday.

Oh yes, and then there’s the U.S. Dollar to worry about…